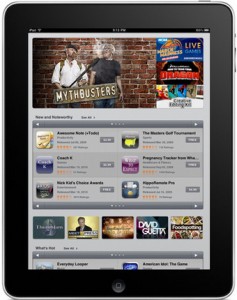 If you’re in the US or in the UK and used BundleBox your shiny iPad should be here by Friday or there abouts.

Well, there’s finally been some leaked screen shots of the iPad App Store and apart from the shots looking rather pleasing the one thing that leaped out was the that the iPad apps are gonna be quite a lot more expensive that than the iPhone/iPod Touch ones.

Ok, so not a huge surprise to most people if you figure that the iPad is bigger and its apps will also be bigger and more complicated with, in theory, with more features. All those extras will bumped up the price.

Just remember when Apple first opened its App Store? Nobody knew what an iPhone app should cost and it was down to developers to test the water. Over the course of a year the average prices of apps levelled out so that cheap and easy ruled the market, and the App Store economy became a problem for developers trying to compete in a world of “ringtone apps.”

The iPad is a real computery tablet thing and not a pocketsized device and chances are that folk will be using the iPad for longer periods of time. Apps for that kind of attention will require more resources to develop and thus try to charge more. I can see a whole new ‘testing the water’ with the iPad apps as people figure out how they’re going to use the iPad. I’m also expecting that developers will follow Apple’s lead seeing as they’re already charging $10 for a full-featured iPad application with iWorks.

The App Store is going to be very cluttered soon because as well as Lite, Free, Pro, Premium, Trial, etc versions appearing there’ll be the likes of HD, for iPad, iPad, XL and Deluxe joining the ranks. Will Apple allow this level of confusion?

Padgadget has had a root around on the iTunes database and found quite a few titles marked with those HD or XL labels I mentioned earlier. HD is a tag used by devs to mark out iPad apps, while XL is a marker also favoured by those looking to break into the App Store.

Apple has already removed the links to these titles from the iTunes catalogue, suggesting the chaps at Padgadget are right on the money with this stack of games.