New iPad – All the Details, UK Release Date and Prices 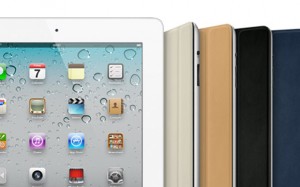 You may have heard that Apple has launched the new iPad. The third generation of the tablet which pretty much invented the market has been unveiled by CEO Tim Cook to the usual enthusiastic audience.

Apple has announced the new iPad, still known as the iPad or the next-generation iPad – I reckon that most of us will still call it the iPad 3. Apple CEO Tim Cook claimed that there have been “amazing improvements” to their tablet.

Cook took to the stage to announce the new iPad with the boast: “Everyone’s been wondering who will come out with a product that’s more amazing than the iPad 2, with its big incredible screen, super-fast chip, all day battery life and elegant thin and light design. Stop wondering. We are.”

So – is there anything to be amazed about?

For a start, there’s the display. We all knew that the resolution was going to be bumped up to Retina Display status. That’s 3.1 million pixels – 64 per inch. That’s more than your HD TV. New iPad Retina display

The iPad 2 offered you a resolution of 1024 x 768, a pixel density of 132ppi. It was ok but, Apple wants to keep ahead of the pack, especially with HD displays becoming commonplace on a wide range of mobile devices. The iPad HD screen is still an 9.7-inch IPS display, but the resolution is 2048 x 1536, giving you a pixel density of 264ppi.

This translates into being incredibly sharp and detailed with Apple claiming 44% greater colour saturation than previously.

“You are going to see graphics, text, icons, sharper than you can imagine,” said Apple’s Phil Schiller.

Not only that, but all of the relevant apps (Safari, Pictures, etc.) have been scaled up to Retina Display standards. Developers needn’t worry: the new iPad scales up existing apps – especially text – to a decent Retina standard.

Apple has equipped the new iPad with the leaked A5X processor.

This is a dual-core brain with quad-core graphics. It’s more than a tweaked A5 as it provides far greater graphical powers and silly-fast speeds. I’m talking about four times faster than the Tegra 3 chip.

The new Infinity Blade title looks very swish with the makers, Epic Games, saying that: “the Unreal engine is unleashing the power of the new iPad for unparalleled character detail and environments. This new device has more memory and a higher resolution than an Xbox 360 or a PS3.”

As expected, the new iPad camera has been improved over the iPad 2. On top of that there’s what Apple’s calling the iSight camera: essentially the same 5-megapixel number that’s found in the iPhone 4S but at a slightly lower resolution.

You’ll now get Full HD 1080p video capture from that rear camera and iOS 5.1 brings software stabilisation to the unit.

LTE on the new iPad will be available on supporting networks (not the UK for a while then).

The hardware will support HSPA+, DC-HSDPA and LTE as well as the new iPad being 3G ready world-wide and ready to explore the planet.

You’ll also be able to create a personal hotspot using Wi-Fi, Bluetooth or USB, as long as your network supports it.

Surprisingly, Apple claims that the battery life of the new iPad is as good as the iPad 2 – so that’s around 10 hours. Apple says you’ll get 9 hours on mobile data, which isn’t bad at all.

Apple made no specific announcements about accessories for the new iPad, but the existing Smart Cover, launched with the iPad 2, still fits and does the job.

I have it on good authority from a personal source that Targus will be releasing what has been described to me as fitting the Smart Case design and will be offered with a free stylus. These are already in a UK warehouse ready for despatch. Watch this space.

It has been confirmed that the iPad release date in the UK is Friday 16 March.

Vodafone and Three have both said they will stock the new iPad in due course.

The new iPad will have six versions available in the UK, three Wi-Fi and three Wi-Fi + 4G (in black and white colours, so actually there are 12 versions if my shockingly poor maths skills are correct).

The iPad 2 will now be available from £329 and sold alongside the new iPad.