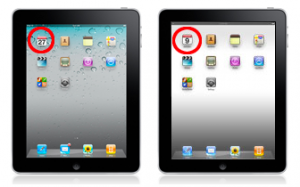 An image which apparently gives a huge clue to the date has appeared.

This candid photo shows the next gen iPad brazenly flashing the date as February 9th.

It all makes sense when you recall that the homescreen of last yearâ€™s original iPad unveiling saw the calendar app depicting the date as January 27th, matching the date Steve Jobs took to the stage and shook the tech industry. Now d’ya see? 😉

It must be close as there has already been rumours aplenty as to what changes will be made to the hardware. Retina-type display has been mentioned and then poo-pooed. Dual cameras are almost a definite as is a slimmer case and, although a welcomed idea, the SD card slot seems to go against the whole Apple ethos.

iOS 4.3 Beta version 2 has already proved that there’ll be cameras thanks to icons for Camera, FaceTime and PhotoBooth applications.

So, will it be February 1st, the 9th as the screen shows or do you think Apple will try to hi-jack Mobile World Congress’s headlines with a release date the same as their opening day and Valentines Day – February 14th?