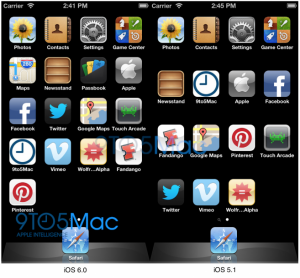 Thanks to a new beta build of iOS 6 the new 9-pin dock connector and five rows of apps on the home screen were revealed to be set to appear on the upcoming iPhone 5.

The latest discoveries appear to confirm that the next version of the iPhone would have a taller display.

After some tweaks to the iOS simulator application found in the iOS development tools, 9to5mac was able to run a simulation of iOS 6 at the rumored 640 x 1136 resolution.

For all you app collectors out there, this means that the screen that can handle five rows of icons instead of the usual four.

9to5mac also found evidence in the latest build of iOS 6 that Apple will indeed be swapping its current 30-pin connector for the much rumoured smaller 9-pin dock connector in the next generation of iPhones and iPads.

This will certainly annoy everyone that has invested in iPhone docks, charges and speakers as the new connection would render these add-ons as being useless. No doubt Apple will cash in with some handy adapters 😉

This all follows on from the news that the iOS 6 beta release shows that the YouTube app has been scrapped from the default list and that Apple will be replacing Google Maps in iOS 6 with its own mapping application.

Hopefully all the whispers of the thinner but longer iPhone 5 being released, possibly with the iPad Mini, at an Apple event in San Francisco on September 12th are true.