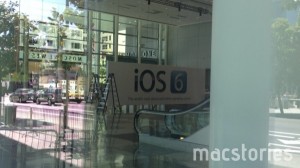 Thanks to some eager-beavers loitering outside the WWDC 2012 venue, we have pictorial confirmation that iOS 6 is official.

Other banners spied in the Moscone Centre are emblazened with Mac Messages, Mac Notification Center, and for a Mac Game Center, suggesting we could see updates to these core apps.

WWDC kicks off at 6pm this evening UK time, that’s 11am in San Francisco, so expect Twitter and FaceBook being jammed with fruity updates 😉

The biggest change to be whispered is to hit Apple’s Maps app. Plans for iOS to ditch Google Maps for an own-branded cartographic route-planner is said to feature true turn-by-turn navigation and flashy 3D effects.

What else do you want from iOS 6? Let me know as we count down the hours 🙂