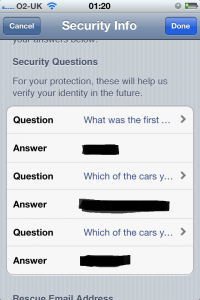 I got a little message from Apple last night, well, this morning. It seems that Apple is starting to ask iOS device owners to update their security by answering new security questions.

I had not seen any news about this but, after checking around, it appears that iPhone users have started to report this security notification a few weeks ago.

Apparently there have been reports of unauthorised payments coming out of some users iTunes accounts and there is so many phishing scams being pulled every day it’s getting silly – so this can only be a good move on Apple’s part.

None of my friends have had this request pop up yet but this has left some owners confused about whether the prompt is legitimately from Apple.

The prompt that shows up on an iOS device says “Security Info Required” and then goes on to ask the user to select from a handful of security questions and provide answers.

If the user has not yet provided a backup e-mail address to Apple for his or her Apple ID, Apple requests that as well, and then prompts the user to verify it using a link to Apple’s website.

In addition to the prompt on the iOS device, some have reported (via Apple’s discussion boards) that they are being asked the same questions via iTunes on the computer.

I am all for heavier security, it’s just more than a little ironic that some users are suspicious of the prompt and believe it to be a phishing attempt.

If you do get this notification it is real and is from Apple.

Have you got yours yet? Did you know about the new set-up already?