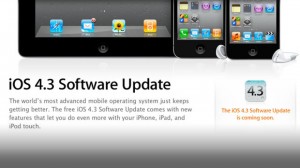 Even though all manner of blogs were predicting the latest Apple iOS to appear yesterday Tea Time, 4.3 has just dropped into iTunes within the last hour or so.

It’s not a huge leap but it does give things a nice little tweak in the functions.

So – what’s better with your iPhone/Pad/Pod with iOS 4.3:

Bounce over to iTunes and update now!