iOS finally gets a real YouTube app ready for iPhone 5 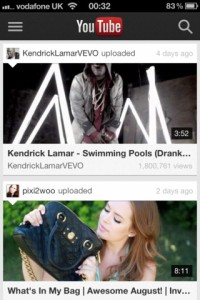 The latest Apple operating system for their mobile devices, iOS 6, showed a distinct lack of YouTube in the default apps list. Well, you’ll still be able to get your fill of cute cat videos thanks to the new stand-alone app.

The iPhone YouTube app was handy, but not great. You couldn’t share directly to Facebook and the searches weren’t always that helpful for example. But, the app has been a staple part of iOS since 2007.

This was the source of shock when Apple released the first glimpses of their new iOS 6 operating system and we all saw that Apple had removed the dedicated YouTube application. ~GASP!~

To be fair, the iPhone YouTube app was built by Apple and wasn’t as good as it could be. This new version, however was built by someone who actually cares about YouTube – its owner, Google.

“The new app is built by YouTube engineers, to give our iPhone and iPod touch users the best mobile experience” reads the post. “Swipe your finger from the left edge of the screen to reveal a guide with your subscribed channels on YouTube, giving you instant access to everything from Alli Sports to YOMYOMF.”

The app also features autocomplete search, much like Google Instant, with an emphasis on popular videos.

YouTube has been putting the emphasis on channels for a while now, and the app is no different. Swipe from the left, and you get a list of the channels you’re subscribed to.

Naturally, the app also lets you post videos to Twitter and Facebook, even iMessage with a tap — although Google+ gets pride of place, with the first sharing button. I suppose that’s only right though.

Not only is this all good news for users, it’s also likely to be handy for Google’s bank account as it will now be able to show ads before YouTube videos on the iPhone app.

The first YouTube iOS app, built by YouTube is available from today with a specific iPad version arriving in the Apple iTunes Store in the coming months.