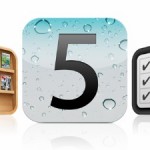 Thanks to having to rebuild this place of gadgety loveliness I am playing catch-up with last night’s news. This was dominated by the World Wide Developers Conference keynote which saw iSteve in attendance as always.

The new Apple mobile operating system, iOS 5, was unveiled which has over 200 new user features!

Senior Vice President of iOS Engineering Scott Forstall stated that Apple devices have received had over 100 billion push notifications pinged to them since the ability was handed to them back at iOS 3. The thing is that the devices owners have always thought that Apple would and should have a more elegant way of notification than the single-notification pop-up. iOS 5 brings in a full Notification Center.

In a move aping Android, when you swipe down from the status bar, you enter the new world of the Notification Center. Here you will see all your missed calls, voicemails, text messages, e-mail messages, Facebook updates, and any other push notifications. Current local weather is displayed at the top, and you can even add stocks and shares updates if that’s your thing.

The best thing with this new Notification Centre, as far as I’m concerned, is that those pesky notifications will no longer interrupt what you’re doing when they ping.

Forstall comforted the WWDC audience saying: “If you’re playing a game and someone sends you an SMS, you get a little notification across the top to let you know…. If you keep playing your game, it’ll automatically dismiss itself.”

If you’re not just about to finish the end-of-level guardian off or clock up a new personal best on Angry Birds and you want to act upon the notification; just tap it and you’ll be transported to the related app.

Apple has decided to follow another fruity tech cobbler and is updating messaging to work across all iOS devices just like BB messenger.

The BlackBerry-style messaging will bring iPads and iPod Touches into the communication arena and join their iPhone stable-mates. iMessage allows users to send text, photos, videos, and contact information from any device running iOS 5 to any other iOS 5 device. Nice. 🙂

Message content is pushed automatically from one device to another – more importantly that content is fully encrypted. You can also use delivery and read receipts to make sure the message got to the recipient and verify it was read – although this is probably been devised for enterprise users I am certain that there’s a few parents who will find a use for this 😉 On top of that you will get to see that the other person is typing a response as you do on instant messaging chats.

Forstall also brought up the “post-PC” joy of iPad again. To make the iPad truly “PC Free” Apple has decided to cut the (USB) cord between your iPad/iPhone and your Mac or Windows puter.

No longer will you have to connect your iOS device to iTunes on a puter and, joy of joys, software updates will pass over the air (OTA).

As I’ve discussed before, to make the OTA updates work these will be what’s termed as “deltas,” which means that your device will only download the changes and not the entire OS or app.

Forstall added that iOS 5 will allow syncing with iTunes content, such as movies, music, and more, via WiFi.

Newsstand collects all of your magazine and newspaper subscriptions with new issues will updating automatically in the background. Apple is also adding a special section to the App Store which will allow users to browse and subscribe to magazines and newspapers from around the world.

Mobile Safari for iOS 5 gives your mobile device fully tabbed browsing so it feels just like its grown-up sibling.

Reminders is another new app which helps keep you organised with lists and other things you need reminding to do. It links up with your calendar alarms as well as geolocation data – this is so you get a reminder when you’re in a certain place. No excuse for forgetting that you’re barred from a certain boozer now 😉 Reminders sync with iCal and Exchange too.

iOS 5’s camera will be accessible from the lock screen and you’ll be able to use the the volume-up button to take the pic. This is great news as I can’t be the only one that’s missed pics because of the time it takes to navigate to the camera app. iOS 5 will add optional gridlines fto stop buildings looking like their about to slide off the screen and an autofocus and autoexposure lock. Camera will also include some basic iPhoto-like editing such as auto-correct and red-eye removal.

Mail gets updated with rich text formatting, including bold, underline, and italics, indent control, and so on. E-mail addresses can now be dragged from one field to another.

Game Center is becoming more social in iOS 5 with the ability to add photos, friends lists, and game recommendations

iOS 5 is set to ship in the Autumn and is actually compatible with iPhone 3GS as well as iPhone 4, iPad, iPad 2, and third- and fourth-generation iPod touches.