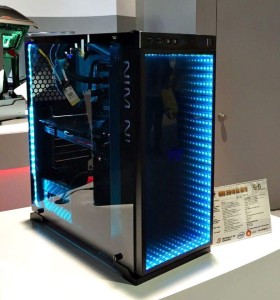 In Win is known for its metal-and-glass enclosures for enthusiasts, and it was showing off its latest kit at CES but it is their infinity mirror packing 605 that has really caught my eye.

The sides of the 605 are In Win’s traditional glass, mounted to a metal frame. The fancy is at the front though.

Thanks to a set of mirrors and a wrap-around LED strip you get the effect of looking in to an endless LED-lit pit. This clever infinity trick actually on takes up less than an inch of depth.

Behind that front panel, the 605 is similar to In Win’s 805, which is already available. It fits ATX motherboards, has a USB Type-C port on the front panel, and space in the front of the case for two 140mm fans or a radiator. There’s space for two bottom-mounted 120mm fans and one in the rear as well.

The 605 will be available later this year, although In Win have been quoted as saying that they’ve not really committed to the infinity mirror as yet.

Personally, I say keep it. What do you think?

If you fancy a bit of DIY check out how to add the same effect to your current rig:
[youtube id=”b2bvWArORSc”]