PS4 and remote gaming is the most exciting news to hit the Vita. Myself and Punk are super pumped about having the opportunity to play PS4 games on the handheld. We’re going to be covering as many of these games as possible, so when we heard about Eiconic Games moving into PS4 gaming we had to know more.

Eiconic Games released the stunning gun blazing budget hit Total Recoil early this year. Total Recoil was a riot and made it to No.2 in July’s EU download chart.

Final Horizon is their next project and comes to both PS4 and PS Vita. David Pollard, CEO of Eiconic Games took time out and kindly gave us the full low down on everything Final Horizon, PS4 gaming and his thoughts on VitaTV.

Can you tell us about Final Horizon and what we can expect?

At it’s core Final Horizon is a story driven Sci-Fi tower defence game where you’re tasked with defending human colonists in a far distant corner of the galaxy against the Insectors, a race of insect-like aliens with highly advanced and diverse weapons and technology. On top of that, we’re throwing in all sorts of extra cool features and ways to play the game that will mix things up a lot as you progress through the story. For example, in one level you might be franticly defending escape pods while you wait for them to launch, and the next you’ll be manning an orbiting weapons platform, raining down destruction on the robotic insectors. It’s gonna be a blast!

It’s been announced that as well as its release on the Vita, Final Horizon will also be Eiconic’s first PS4 release. Did you know about the PS4 before its announcement and have to start working on Final Horizon in secret or was the PS4 version a recent development?

Well the game is still in the early stages so really the whole game is quite a recent development, not just the PS4 version. While we were working on the Vita version of Total Recoil we’d been talking to Sony about bringing a brand new IP to the Vita as a follow up and someone floated the idea of bringing it to PS4 as well – until then we’d sort of assumed the PS4 was something only the big publishers would have access to early on, but as is becoming more and more apparent, that’s just not the case with this generation. It’s an exciting time!

Was entering PS4 gaming a big decision to make?

Not at all – in fact we jumped at the chance as soon as we realised it might be a possibilty. We have a history of working on consoles and actually feel more comfortable making console games rather than, say, mobile, so it was an easy decision for us.

What are your thoughts on Sony’s VitaTV from a developer’s perspective? Do you think using Vita touch controls will become less important now?

I think VitaTV is a great idea, completely unexpected, but a very smart and bold move from Sony. As a developer it makes the Vita an even more attractive platform as it will hopefully bring in a whole new audience of gamers. As for touch controls, it does of course mean that anyone now developing a Vita game will have to think about providing additional control schemes that do not require touch, and that will inevitably have *some* impact on support of the touch interface overall. But there’s no reason you can’t have both – for Final Horizon we’ve already been designing control schemes to work just as well with either joypad or touch input because we’re targetting both Vita and PS4, and we’re not about to drop support for the Vita’s touch controls any time soon. 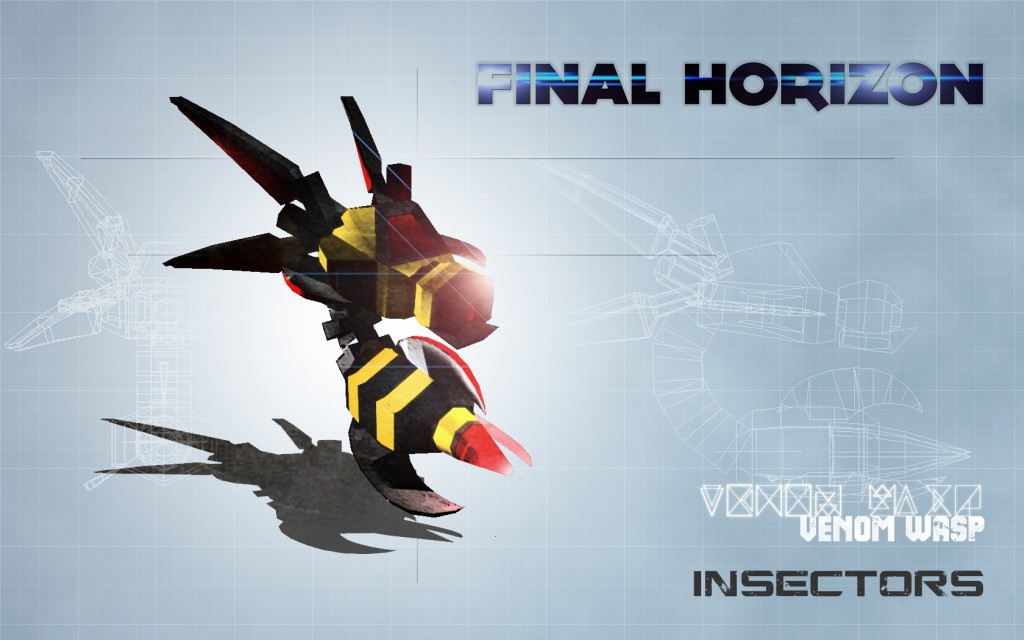 From the designs we have seen of Final Horizon it looks like a Sci-Fi dream. Being released on the PS4, do you feel the possibilities are endless?

There’s a huge amount of potential for doing some very cool stuff with the power at hand on the PS4. To be honest I think we’re going to be more constrained by not having enough time to implement all the outlandish ideas of what we can do with that power. Plus the game is still going to need to run on the Vita so a lot of what we have planned for PS4 is in the visuals.

We were really proud to be the first to review your previous game on the Vita, Total Recoil. We loved it, and the game has got a reputation for being a great value for money game. Is this something we can expect with Final Horizon?

Definitely! We’re going to cram in a lot of content, and add in a massive amount of replay value to Final Horizon. We’re also looking to add a fair bit of variety in how you play the game from one level to the next. That said, we do plan to sell it a *little* bit higher than 79p!

At this early stage do you know if the Vita and PS4 versions are going to be the same?

At this stage we’re not 100% sure what the differences will be in the PS4 version – the initial plan is to have similar content in terms of levels, story, etc, with the PS4 version having a load of extra attention lavished onto it on the visual side. But we may well get carried away and add a bunch of extra, much bigger, epic levels to the PS4 just to see how far we can push the hardware. There’s also some
potentially cool things you can do pairing the Vita to the PS4, which we’re going to look into as well (if we have time!).

When do you expect to have working, playable levels on Final Horizon?

We’re actually not far off having a proper playable level, but we’re still very much in the ‘prototyping’ stage, so it’s not quite ready to show off yet! I’d say give it another month or two and we’ll be there.

Has the idea of remote play put more pressure on Vita games developers to expand their releases to PS4?

I don’t think so, but we never really felt pressured to move to PS4 as such – we just saw it as a great opportunity, so it’s certainly not something that affected our decision. Any pressure we feel is entirely from our own ambition to do the best we possibly can, and make a game we can really be proud of.

A real big thanks to David Pollard and everyone at Eiconic Games. Be sure to check out Eiconic Games and their Total Recoil Facebook and tell’em Punk and Lizard sent you.

We have also teamed up with Eiconic Games to bring you some amazing Final Horizon Punk and Lizard tee shirts. These special promotional tees will be part of our twitter giveaway starting Monday 23rd Sept. And it doesn’t stop there, Eiconic Games have given us a heap of Total Recoil game codes to tweet away. It’s going to be a crazy week here leading into Eurogamer!