One of the games that has really caught our eye recently is Grip Games’  Atomic Ninjas. Seriously this game looks awesome.

Expected later this year and coming to PS3 and PS Vita, we just had to find out more. This week we were lucky enough to talk to Jakub and Jan from Grip Games to get the lowdown on what to expect from Atomic Ninjas:

The brain storming process when creating a game like Atomic Ninjas must get pretty wild. How does the process start? It must be a daunting feeling when first starting to build a game?

Jakub: We don’t work with a huge design document with all the ideas already in it, but we create a very simple prototype that demonstrates that the concept works and then we iterate through literally hundreds of ideas and features and a few of them make the cut into the final game. Our initial concept was that we want to make a simple 2.5D action game. All the other elements of the game came as a result of this experimenting.

When we started with the development, we really hand no idea where we are going to end.

Jan: Yes, our process is very organic and the only thing was a sparkle idea at the beginning – Let´s make little multiplayer action game which we would like to play by ourselves at home with friends and just to have easy to pickup time killer. Nothing complicated but very very fun to play.

In Atomic Ninjas the way in which you take out your opponents is not as straight forward as a karate kick. Was kick and punch something that you wanted to steer away from in the game?

Jakub: We found out very early that trying to push other opponents into environmental hazards, instead of relying on the traditional shoot & kill mechanics, is much more fun, so we decided to build the whole game around this concept.

Punch is actually not the only way to do it, you can use more long-range weapons, like Shuriken, but they all work on the principle of pushing other players away, hopefully into an acid pool. We knew that we needed to be different and this mechanics is very fresh, I wouldn’t be afraid to say innovative

Jan: The typical shoot & kill mechanics is very frustrating and I can say that our innovative 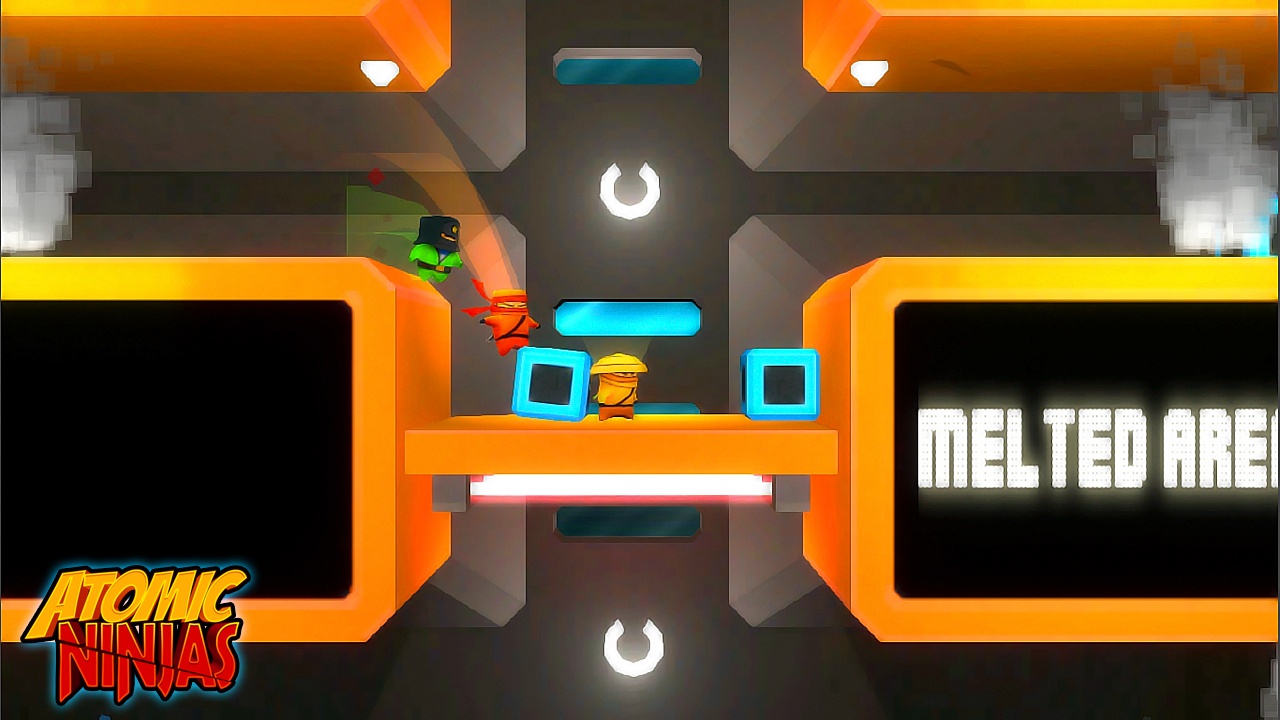 The crazy moving backgrounds and platform designs look awesome, these must be big factors when creating a fast and furious game.

Jakub: We wanted the looks of the game to be completely different from anything else you can see elsewhere and the first contact with the game’s look to feel almost like a punch in the face. It’s funny that you call the arenas “crazy”, because all we really did was introduce some lush and bright colors and instead of having super-detailed textures, we went with just combinations of light & shadows.

Most of the games today try to be dark, gritty and realistic. We wanted to go against this trend and have something fresh. The crazy ninjas and music came afterwards, to give the game a sort of cheeky and humorous charm.

Jan: The look development was very important process for us and as Jakub said, the colors, light and easy to read structure was the key factors. Also the look and design of little ninjas wasn’t an easy process. When we started, there was only a block as main character in the prototype and no idea about the overall setting of the game. I can reveal that the first concepts were based around some space aliens and monsters, but during the evolution of weapons and environment hazards we found that ninjas are exactly what we need. I am very proud of the final look because it was very challenging to find the best balance between interesting character design and well-arranged gameplay.

Do you always use the same team of developers at Grip Games or are changes made to your team depending on what type of game you create?

Jakub: The core of the team remains the same, but there is always some fluctuations. Some people decide to look for other opportunities, others want to quit working on abusive mobile games and want to create real games, so they join us.

The type of games also makes a lot of difference. There were more 2D artists involved than you would expect for such a game, we found an expert AI programmer to make our ninja bots more compelling, etc.

Jan: For people who are more interested in the development, we have prepared feature and development videos, where we would like to show more from the design and concept stages of the game during the development.

Can you tell us some info about the trophies, and will there be a platinum trophy?

Jakub: Hunting trophies will hopefully be a lot of fun! There is one gold, four silver and seven bronze trophies. Platinums are unfortunately only reserved for large-scale games.

There are skill-based trophies, like killing a lot of players in a single match, there are progress-based trophies for unlocking stuff and there are also a few trophies that we included just for fun. There actually is a hidden trophy that you’ll get for playing really badly

It should also be noted that the game has its own “Ninja Trials” system where you have a lot of challenges that you may complete while playing matches and that will keep you occupied if you already have most of the trophies unlocked.

Will Atomic Ninjas be cross-buy?

At Punk and Lizard we are not huge fans of demo’s being released of games. What are your thoughts on this?

Jakub: That’s difficult. A really great demo can help your game. A really bad demo can ruin the sales, even if the game is great. Since the demo only shows a small part of the game, it may not be the best way to present it.

Atomic Ninjas will have a demo. But we tried a different approach. It’s not just a 30 minutes long single-player level. I won’t tell how exactly we approached this, but hopefully, you’ll appreciate it. 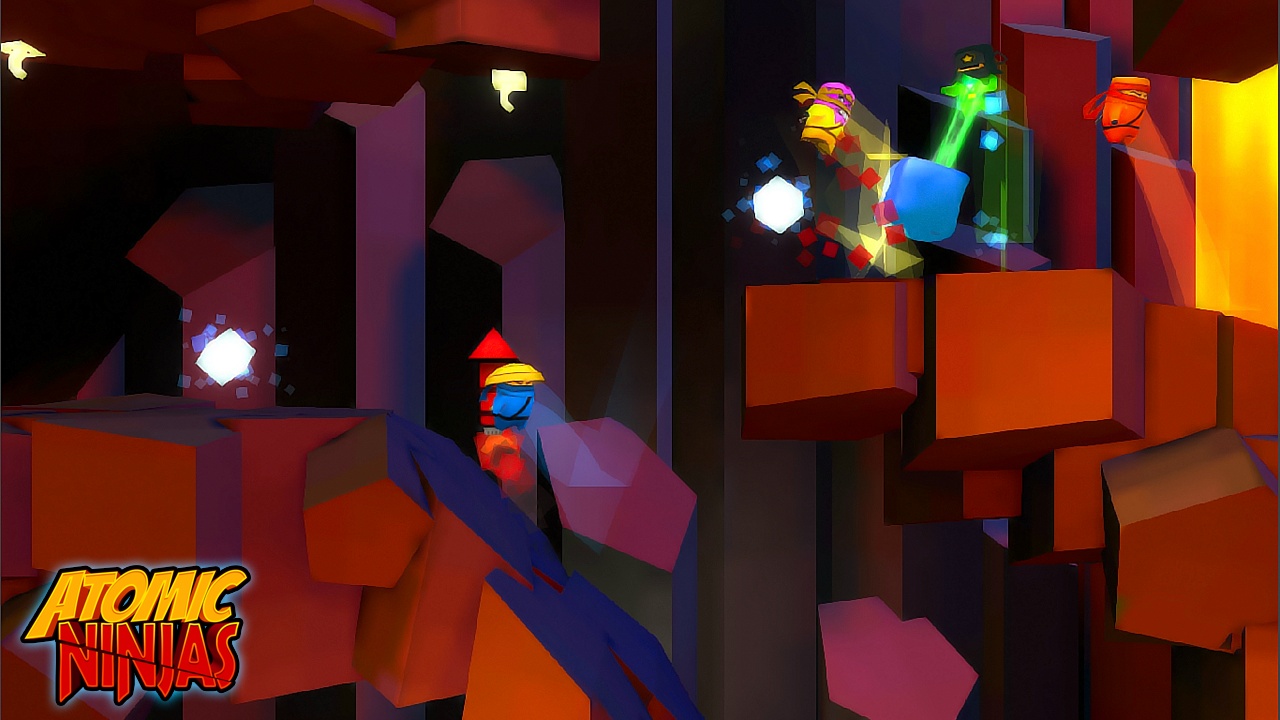 Where can we find out more about Atomic Ninjas in the weeks before the release?

When can we expect to see Atomic Ninjas and have you any idea on the price yet?

Jakub: The PS3 version will be released at the beginning of September, the Vita version shortly after that. The price will be under 10 USD/ EUR.

Huge thanks to Jakub and Jan from Grip Games for taking time out to speak to us. Super nice people who are making a killer game. Check them out on Facebook and Twitter and tell ‘em Punk and Lizard sent you..