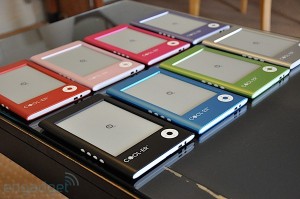 Interead is looking to pounce on the band-wagon of the craze that is e-book readers with the COOL-ER.

Jones calls the Cool-er the first of its kind to be designed specifically for the non-technologically inclined reader in mind.

Neil Jones is the company founder and describes it as the “iPod moment that e-readers have been waiting for”.

Looking at it, there seems to be more than a little nod towards the iPod nano’s style, and the COOL-ER is available in eight different colour options.

It weighs a luggable 6.3 ounces (less than half of the Kindle 2 but with the same 6-inch e-ink screen), and is small enough to fit comfortably in your jacket pocket.

It packs a 1GB internal memory and a SD card slot, as well as a 2.5mm headphone jack with a 3.5mm converter bundled with every device.

The bells and whistles are pretty basic as it has no keyboard, text-to-speech, WiFi, or Whispernet equivalent.

You have to load files via USB or SD card but then it’s priced at $250.

The company’s also launching an e-book store and offering an extra discount for customers who register their COOL-ER.

It’ll go on sale May 29th for US and Europe via its website, with retail distribution partner expected to be announced closer to the launch date.