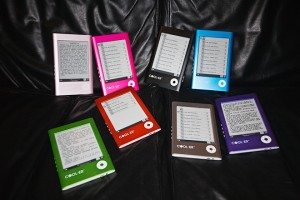 Interead is planning to launch a wireless connected, 3G Cool-er with a colour screen by early next year.

The Cool-er is not only bragging about setting up a colourful screen but it’s also thinking about making that bad boy a touchscreen as well!

Before you dismiss that as being mere bluster may I point out that this eReader startup has come from nowhere to become number two in the market behind Sony in the UK in just three months!

The current crop of Cool-er’s are available from Firebox”>Firebox and Interead has just done a deal to provide Google Books through its online store, giving it a vast catalogue of content to fill devices with – more titles than the Amazon Kindle can muster 😉

Thing is to be able to sell a 3G device, it’ll need a phone network to partner with – which, apparently it has.

Cool-er says its already inked a deal with a network but can’t reveal which one yet. It also has plans to partner with magazines and newspapers to bring them to its future colour screen ebook reader.

So, you gonna head over to Firebox”>Firebox and grab one?