Intel North Cape is how your 2013 Ultrabook will look 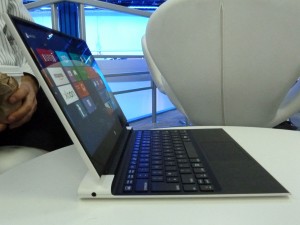 Intel has been showing off what it wants Ultrabooks to look like this year – and I am impressed.

It looks like Intel sees the future of laptops being convertible tablets, like the Transformer Prime, for example.

Intel has come armed with its North Cape reference Ultrabook at CES 2013 and stands as what the company sees as being the future of the slimline laptops.

The North Cape is, in essence, a Windows 8 tablet with keyboard dock which is loaded with Intel’s as-yet-unreleased 4th generation core.

The tablet’s a mere 10mm thick, while the keyboard dock adds a further 7mm. Battery life is a respectable 10 hours for the tablet alone, which is boosted to 13 hours when it’s docked.

Future Ultrabooks will have to pack Intel’s Haswell architecture, along with WiDi and a touchscreen – and although makers are not obliged to copy all the features from North Cape I am hoping that some manufacturers basically copy the spec sheet of this reference device.

The North Cape machine has a natty “porch” on the back of the dock – this prevents the top-heavy tablet from flipping the docked machine over – it also provides a handy place to put the I/O ports.

Then there’s the clever docking mechanism that uses an electromagnetic wire to keep the two parts together – simply press an eject button on the right of the keyboard to detach them.

Another thing that they’ve thought through is giving you the best screen-size for the job in hand. Intel’s Smart Frame feature lets you flip between two screen sizes when the North Cape’s docked and undocked; when docked, the screen’s a near bezel-free 13-inch, 1920×1080 pixel display.

Undock it, and the screen shrinks down to 11.6-inches, which gives you some black space to hold the tablet without setting something off.

A button on the top left of the screen lets you switch between the two screen sizes when docked or undocked, if you want some extra screen real estate on the tablet.

Is the North Cape enough to show regular laptops the exit?