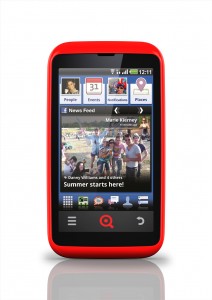 British-based mobile manufacturer INQ has finally come clean and revealed the INQ Cloud Touch and the INQ Cloud Q â€“ two Facebook Android mobiles. Â These will continue from where the originals left off.

The Android 2.2 handsets use Facebookâ€™s single sign-on for mobile, as well as its social graph for pulling in relevant news based on your past interactions.

It’s no surprise that their homescreens feature shortcuts to the main areas such as Facebook Chat, Friends, Messages, Wall and Notifications.

The INQ duoâ€™s social features donâ€™t begin and end with Facebook, though. Both the Cloud Touch and Cloud Q use Spotify as their default music player, supplying both streamed and stored tracks through a â€œdedicated Spotify key.â€

Both have very similar capabilities – the main choice you’re going to have is whether to go for the touchscreen sporting cloud Touch with its 3.5-inch capacitive display or the Cloud Q which is rocking a Qwerty keyboard and a 2.6-inch touchscreen.

Itâ€™s known that the Cloud Touch will run on a 600 MHz Qualcomm CPU and will feature a 5-megapixel camera and should be out in April. The Cloud Q, however, should appear around the third quarter of 2011.