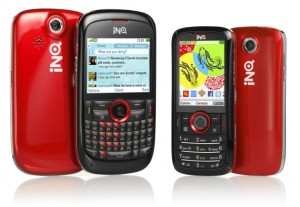 It’s almost a year ago since I reported about INQ’s Facebook mobile the INQ 1.

Now they’ve gone ahead with a pair of new socially aware phones that promise not to hurt your pocket – named Chat 3G and Mini 3G.

The INQ Mini 3G follows directly from where the INQ 1 will hand over with its candybar form; whereas the INQ Chat 3G brings a QWERT board for swifter updating and emailing.

With both handsets you’ll get a funky Twitter client that INQ says will run in the background so there’s no chance you’ll miss one of those important 140 character posts from the microblogging sensation – A Twitter widget will show tweets on the home screen.

The Chat will support push Gmail.

Both mobiles will sync with doubleTwist, which means you can sync your iTunes music. Nice 🙂

They will also keep the Facebook, Skype and IM apps that worked real well on the old INQ 1.

The Chat is armed with a 3.2 megapixel camera, GPS, and 120MB of on-board memory, expandable up to 8GB.

The Mini gets a 2.0 megapixel snapper, and 100MB of on-board memory expandable up to 8GB.

Connection will come via HSDPA over 3G and you’ll be able to hook either handset up with your Mac or PC for tethered surfing – just a shame that there’s no Wi-Fi though.

The new INQ’s will come in seven colours including the rather striking red shown here when they drop into stores in time for Christmas.