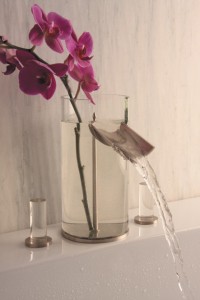 It’s been a while since I’ve posted anything that will make your living-space nicer to be in so here’s a natty idea that combines making your bathroom smell sweeter and look nicer.

It’s a tap (or faucet for our trans-Atlantic friends) that manages to be a vase at the same time.

The idea belongs to Hego Waterdesign.

The clever design means that the glass spout of the Lavbo fills up with water keeping the vase topped up with fresh stuff and then pours out the top in a waterfall type effect.

There’s just a couple of things that are troubling me though: