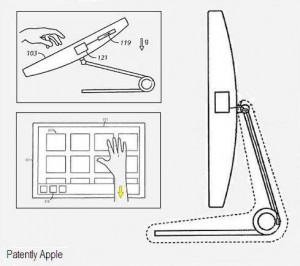 How does a brand new iMac that features a giant iPad on the flipside sound to you?

Well – this is latest odd Apple patent that has made its way on the interwebs.

Apparently this odd yet brilliant patent was filed on January 14th this year entitled: â€œiMac Touchâ€.

Instead of simply adding touchscreen capabilities to the iMac screen, just like any other touchscreen all-in-one, the diagram shows that the concept iMac would operate same as normal but then can be swivelled down to lie almost flat in front of the user.

OK – that would make it more comfortable to use in touch-mode but that would be a bit mainstream still. This iMac would sense that it was being used in touchscreen mode and automatically switch over from OS X to a version of iOS as used by their current touchscreen devices such as the iPhone and iPad.