I’m Core Processor will Power your Phone, Tablet and TV Wirelessly from your Pocket 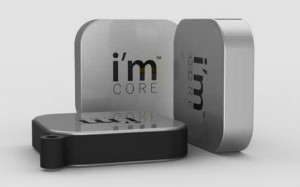 You’ve grown attached to your mobile phone but want to keep up-to-date with the latest processors – it’s time to make a choice. New phone or watch your friends leave you behind with their latest tech. It doesn’t have to be that way if ‘I’m’ have their way.

The Italian company, confusingly named I’m, has plans to release a keyring dwelling processor that will power all manner of devices and will allow you to update the brains without having to replace the device.

The I’m Core is a matchbox-sized processor unit that can be used to power all of your devices – to that end I’m plans to launch the I’m Core alongside a phone, tablet and Smart TV set-top box trio known as the I’m Circle.

Inside the pocketable (45x45mm) box is a quad-core processor, SIM card, GPS unit and, amazingly but very neccessary a WiFi connection.

Stick it on your keyring and as soon as you’re within range of any I’m device the Core will kick into life and power that chunk of hardware.

It’s not only great because you will be able to update just your I’m Core, which should be cheaper than updating all your gear, it also means that your phone and tablet can be much thinner because they don’t need to be able to fit the processor and associated gubbins inside.

I’m plans the launch of all this cleverness in late 2012 and will appear in seven colours: green, grey, blue, yellow, purple, red and black.

I think it’s genius but I’m not sure it will happen – I hope I’m proves me wrong.