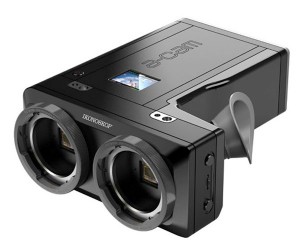 If you want to get onto the 3D film bandwagon but would rather be behind the camera than stuck in a pub watching footie then check this out.

Ikonshop have developed a new camera that is is capable of shooting 3D video in Full HD at 1080p.

The Ikonshop A-Cam3D captures two separate video streams at once, in a resolution of 1920 x 1080 pixels in RAW files.

Colour depth is set at 12 bits at frame rates of between 25fps and 30fps.

The Ikonshop A-Cam3D weighs in at 2.8KG, this include the battery and the memory card for recording the videos.