iDrift to iDrive Your iPad 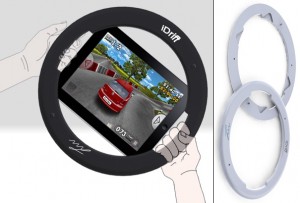 It’s not even a week ago since the iPad was officially announced and already little iAdd-ons are appearing.

This is a great idea for driving games I guess and a lot more straight-forward to produce when compared to the Wii’s wheel.

What do you think? Would you be slotting your iTablet into the iDrift?