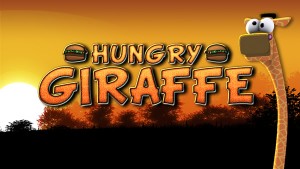 Having upgraded from a PSM title to a fully fledged PS Vita game with trophies, will Hungry Giraffe have you chomping at the bit?

Will you be hungry for more? Or will it leave you biting off more than you can chew? OK enough with the food references…

In order to stay in the game you have to eat as much food as you can to keep your comically bendy neck moving through the stages. If you don’t eat enough, your neck will fall back down and it will be game over. The game is essentially one continuous level and your goal is to hang in there for as long as possible. 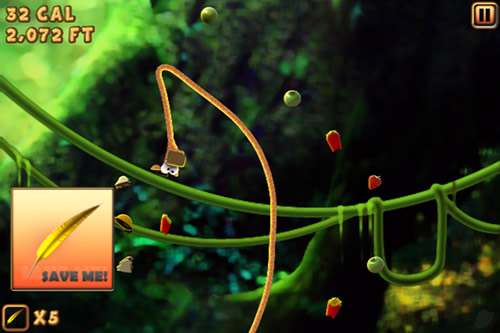 Some things are good for you to eat and will help you progress, like fruit and fast food. You can also gorge on chilli peppers which give you a heated blast upwards or swallow a hard hat to push you through any obstacles without having to avoid them. Some things are bad for you however and can throw you off course. Pills turn the screen upside down and reverse all your controls. Dumbbells weigh you down and poison makes you throw up technicolour puke on the screen, making it harder to see where you should be heading.

As well as moving through stages, every time you eat something you’ll be collecting calories. These calories can be used to buy yourself helpful items in the game, such as angel feathers, which you can activate by using the touchscreen and give you a lifeline when it looks like it’s going to be game over. You can also spend real money via PSN for Calorie Packs if you don’t feel like waiting. 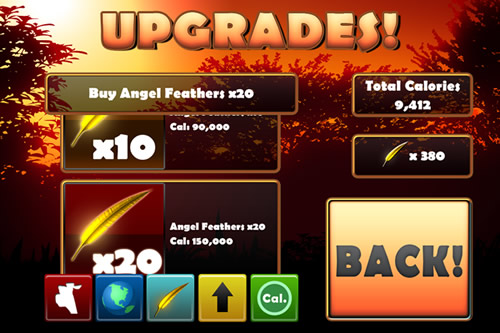 It has to be said the giraffe your playing as is ridiculously cute. The noises he/she makes whilst chomping away accompanied by the orchestral music (which adds a great bit of subtle humour to the gameplay) really have you rooting for your long necked protagonist.

The absolute genius of Hungry Giraffe is that it’s such a simple idea but incredibly well executed.

It won’t change your life but it will give you hours of fun, addictive gameplay.I haven’t been able to put it down since we received it here at Punk and Lizard.

With 8 trophies and priced at only £2.39, this game is an absolute steal.

Hungry Giraffe is a fun, sweet and addictive gem. Indulge yourself!