Hug Me Pillow – When You Miss Your Other Half 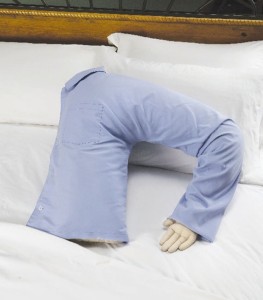 No real surprise that the price has been cut for this as, to me, it looks freaky as hell.

To be honest I’d find it difficult enough sharing a room with this; let alone a bed.

But for those of you that have been waiting for such a deal the creepy one-armed â€œHug Me Pillowâ€ has dropped from $44.95 down to a more manageable $29.99 you, errrrrrr, lucky folk!

The specs as per Crunch Gear:

Hug Me Pillow via Overstock.com via dealnews via CrunchGear