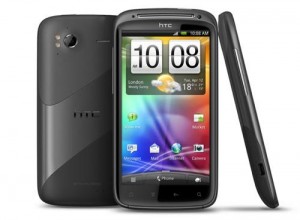 HTC has gone all official with their Sensation.

The Sensation is HTC’s first dual-core smartphone had has been leaked plenty many times under the guise of theÂ HTC Pyramid – it even got leaked before the London press gathering today by none other than Vodafone!

The Sensation, which will be available in two colour schemes, will be sporting Googleâ€™s Android 2.3.3 Gingerbread operating system cloaked in the new and improved HTC Sense UI. This latest version of the extremely popular user interface which has no doubt made HTC Android handsets top of many people’s mobile shopping lists has a few more tricks up its sleeves.

The biggest bonus on the new Sense user interface is the app icons on the handsetâ€™s lock screen which will allow HTC owners to jump straight into desired applications by unlocking the device via a drag and drop of the preferred app.

There’s a few of these swanky new smart lock screens to choose from – this means that Sensation users will be able to preview, and open directly into, Facebook or Twitter updates, news feeds, picture galleries, etc.

As you’d expect from a top level HTC phone, the Sensation is wrapped in a uni-body crafted aluminium shell which will come in a choice of grey and purple. That body is a mere 11.3mm thick and a featherweight 148 grams.

When the Sensation lands in the UK in May (perhaps along with its stable-mate, the HTC Flyer tablet) it will come equipped with HTC Watch, a video purchase and rental service.