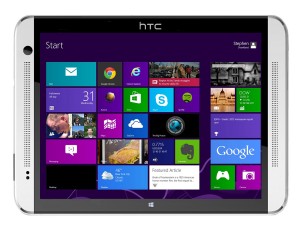 HTC could well be outing a Windows 8 tablet later this year if reports are true.

Word has come via FocusTaiwan that HTC has already got some way in to the production of a Windows 8 tablet.

Rumour has it that the mysterious tablet is to be loaded with a 10.1-inch, 1920 x 1080 resolution full HD screen and will be running Windows 8.

It’s not certain whether this new HTC slate will be running Windows 8 RT or the fully fledged Pro version – or if there’ll be a choice from both.

According to market research firm NPD DisplaySearch, the mystery tablet is already being built at Taiwanese manufacturing company Pegatron, with a launch set to come in the next few months.

It’s been a couple of years since the HTC Flyer hit shelves and then failed to fly, so I am hoping that HTC is able to put together all the loveliness found in its HTC One smartphone and squirt it out in tablet form.

If HTC manages to push out a 10.1-inch version of the One, with its sleek metallic looks, and running Windows 8 RT and/or Pro then I for one could well be in the queue come launch day.