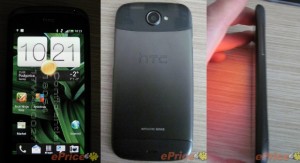 It looks like HTC have a slim Ice Cream Sandwich phone ready for Mobile World Congress judging by these spy shots of the HTC Ville.

The HTC Ville did make an earlier video appearance but these pics are clearer I reckon.

These snaps seem to be from the same office, if not the same person, that gave us the video (see below) before.

Between the video and the pics you get a decent idea of what the Ville looks like – it’s quite thin for a HTC aint it?

The new HTC seems to be sporting a 4.3-inch Super AMOLED display with what should be an 8-megapixel camera around the back.

Under the hood will probably site a 1.5GHz dual-core processor which will push Google’s latest Android OS – Ice Cream Sandwich.

Naturally, Ice Cream Sandwich, as with all the other ‘droids on HTC handsets, will be clothed in the newest version of the much loved HTC Sense.