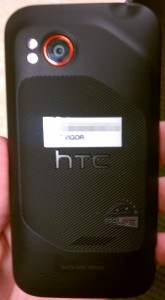 I mentioned the HTC Vigor earlier this month and now it appears to have leaked online all kitted out in its own Hip-Hop finery.

HTC and Dr Dre announced their “strategic partnership” a few weeks ago which will see HTC phones getting the “iconic Beats by Dr Dre audio experience” whilst Dre makes some paper.

HTC claims that the Beats technology, previously seen bolted onto Monster headphones and earphones as well as HP laptops, will give the new mobiles the ability to “reproduce the full spectrum of sound captured in professional recording studios”.

Hmmm…. I’m guessing that the bundled headphones will be of studio monitor quality then? 😉

Sorry, I am obviously being a tad sarcastic and should not preempt what could be staggering sound quality being pumped out of a mobile handset.

The Vigor shown in these leaked photo’s certainly has the Beats by Dre look which would suit having his sound tech shoved into the Beats blower.

Check out the Beats red ring around the camera lens and the over-sized ‘look at me’ chunkiness of the rubber backplate. The Vigor is pretty much the phone version of the full-sized Beats headphones.

Personally I’m a little let down by the front though. Granted, the touchscreen looks as though it could almost be 4.5-inches (rumour has it that it’s 4.3-inches!) but the rest looks like what we’d all expect from HTC.

Other things of note – the Vigor is equipped with a front camera, and a flash on the main rear camera. Yeah. That’s pretty much all that’s given away – Oooo, apart from it will be running on HTC’s much-loved Sense UI.

Word is that there’ll be a 1.5GHz dual-core processor, 1GB of RAM and 16GB of storage sharing internal space with Dre’s Beat Audio Tech.

UK folks might not get to see this phone anyhow as the Vigor’s tipped to be a 4G LTE phone.

Would you want a HTC Vigor Beats Phone to hook up to your Beats by Dre Solo headphones anyway? Let me know 🙂