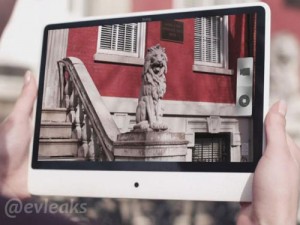 I liked HTC’s Flyer but it didn’t really ever seem to take off. Could this be the new and improved HTC tablet?

The leaked photos of a funky looking HTC slate have found their way on to the interwebs and it certainly has its own style.

The tablet is seen rocking front and rear-mounted cameras on the bottom edge of the tablet, rather than the top and, thanks to its big bottom bezel, it looks like you’re holding a mini iMac screen.

The mystery HTC tablet looks to be a slimline affair, and could possibly be more a 10-inch tablet rather than following the latest trend for 7-inches worn by the Kindle Fire and Google Nexus 7.

HTC wants a “unique selling point” to set the follow-up to its HTC Flyer tablet apart from rivals and word on the street is that they’re working on a quad-core Tegra 3 Vertex HD slate – could this be it?