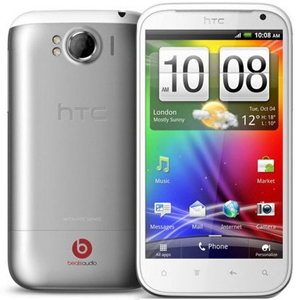 The HTC Sensation XL is out now, and thanks to its huge 4.7-inch S-LCD screen it presents a clear picture of the Android 2.3 OS. The even better news is that the Sensation XL will soon get Android 4.0 Ice Cream Sandwich!

Before I get carried away with what the HTC Sensation XL is going to get – let me chat about what it has got.

Back in time, before the Sensation XL was released there was a HTC Windows phone called Titan. Now, loaded with Android, it is all official and available so what can I say about this larger than life smartphone?

Well, larger is a good place to start – just look at that 4.7-inch display! That’s almost half an inch bigger than the screen of the ‘regular’ HTC Sensation – and that has never been accused of being small. But, you know, size isn’t everything. The screen is a marvelous size for almost everything – it’s just a shame that HTC settled with that 800 x 480 resolution. This screen would be a killer with a higher res!

Under the hood is a zingy 1.5GHz Qualcomm MSM 8255 processor supported by 768MB of RAM. Yeah, it’s single core – but it’s the same chip as found in the HTC Flyer and just check out the Nokia Lumia 800 – that does great things with a single core. 😉

There’s no two ways about it – the HTC Sensation XL is a huge slab of phone (but smaller than that Galaxy Note thing). It measures 132.5 x 70.7mm as you look at it, but catch it side on and you’re happily faced by its 9.9mm profile. And it’s not heavy, weighing in at 162.5 grams. Granted, it’s not featherweight but it’s only about 15 grams more than the much smaller HTC Sensation.

The large screen is really easy to get used to and, before long, you will find yourself blazing off texts, tweets and emails using the nice, large, virtual keyboard and it’s not until you switch back to a more normal sized phone (the iPhone 4 in my case) that you realise just how nice having more space really is.

The HTC Sensation XL unsurprisingly features the same unibody aluminium construction as the Titan, except with some added white bits and a Beats logo near the bottom on the back. This is definitely nothing to complain about, though. The build quality is very good, and there’s very little give or flex in the handset as you hold it.

That screen real estate also comes in handy when using the XL’s 8-megapixel camera. This comes equipped with dual-LED flash and a tasty f/2.2 aperture for super-fast snaps. Zooming in on your pic prey is really easy, even for the most sausage-fingered photographer. You get the usual array of HTC photo effects which are added live to your snaps instead of having to wait to add them in post production. It is a shame that the Sensation XL’s camera can only handle up to 720p video though and not ‘full HD’ 1080p which other premium phones now offer. The results aren’t that sparkly either with videos lacking in detail. On a plus point the XL’s camera does offer continuous autofocus which is a bonus and is generally fast.

It can’t have passed you by that the XL is packing Beats Audio, a product of HTC’s recent partnership with Dr Dre’s audio equipment company. Like the HTC Sensation XE, Beats Audio mode improves sound quality when activated, and when used with the bundled Beats Urbeats earbuds it does pump out the jams. Be prepared to enjoy your tunes with a distinct slant to the bass-end but, saying that, the overall balance is decent and with a range of buds to choose from you’re sure to get a comfy fit. The Beats Audio headphones are solid metal, and also feel really high quality, with the exception of the in-line clicker. This is a special inclusion just for the phone version of the headset, and feels and looks plasticky which is a real shame. It will play nice with MP3, WAV, WMA or even OGG files, but not FLAC lossless – which is a bit of an oversight for a music phone in my opinion.

As this phone is clearly aimed at you listening to music on the go HTC has shoved in 16GB of internal storage which is pretty decent for an HTC device. This means that there shoud be ample room for enough tracks to keep you occupied on the commute but as this is a neat package for avid music junkies an optional SD slot would have been welcomed in order to boost the memory for choonz!

The Sensation XL is loaded with HTC’s lovely Sense 3.5. This is the latest Sense user interface and although there’s only a few tweaks compared with the 3.0 these are just enough to keep HTC ahead of the game I reckon.

You still get the seven Home screens, for example, which can be customised to your liking with a whole range of widgets, apps, shortcuts and more. I am particularly a fan of the Lock screen which features HTC’s ring design for quick access to certain features. There are icons for Phone, Mail, Camera and Messages be default and you can simply drag any of them down into the ring (which actually comes out to meet you halfway, which is a nice and friendly touch) you can unlock the phone straight to that app if you’ve got a notification for it that needs seeing to, or if you want to get snapping quickly. Alternatively, to just unlock the phone, you simply drag the ring up.

I like the fact that this new phone went from not having any of my contacts to being packed with all the contact details of my Facebook friends as soon as I synched with the social network app. That’s pretty darned useful.

The huge screen totally lends itself to relaxed web browsing. The browser hasn’t really changed in Sense 3.0 but pages do load nice and quickly. Opening a Flashless page on the XL and iPhone 4 they seemed to be equally matched.

Opening a site with Flash content does slow the phone down but, to be honest, I’d expect that anyhow. Loaded the BBC News page and watching vid clips occasionally made page scrolling a little less smooth but I’ve seen a lot worse on other droid phones.

The news was spilled via the Taiwanese manufacturer’s Facebook page as it revealed that Ice Cream Sandwich is coming in early 2012. Android 4.0 is designed with large screens in mind as the flagship Ice Cream Sandwich phone, the Samsung Galaxy Nexus, shows. It will have a screen size of 4.65-inches, which is roughly the same as the HTC Sensation XL’s so that could well work in the XL’s favour.

The XL is powered by a 1,600mAh – which is a large battery but you may have have expected it to be even bigger, but that’s the benefit of Qualcomm’s latest single-core processors – they’re very efficient and are capable of surviving a couple of days of very light use, though hammering the social network updates will mean it drops a lot quicker. As with most smartphone’s these days it’s not too difficult to go through full to half charge pretty quickly if you’re intent on watching funny cat vids on YouTube and checking out photos on Facebook.

When first picking up the Sensation XL it’s easy to think that the phone is too big – but, within moments, you soon get used to its XL sizing. You’ll also be won over by the vibrant, bright and clear screen. The resolution may not be as great as it could be but, saying that, it still manages to be nice and crisp and watching vids remains enjoyable.

HTC Sense 3.5 is a nice upgrade and despite being powered by a single-core processor the smartphone responds quickly and smoothly. The camera performs very well and, thanks to the software tweaks, seems to be more responsive. The flashes illuminate even the darkest shots. The camera doesn’t match some others in low-light situations without the flash and I found it got confused occasionally at the gig I took it to but overall it’s a good stills camera. Video footage, however, is another story. It’s just about usable.

Add in the Beat audio integration you get a highly competent media phone but it could have been made even better with the addition of an SD card slot and perhaps support for FLAC lossless music files.

For web browsing, watching videos, taking snaps and, of course, listening to music the Sensation XL is brilliant. If it wasn’t for its few shortcomings such as lacking an SD card slot and the shoddy video capturing when compared with its good stills snapping it would be a no-brainer.

Sort those little things out and pack in a higher res screen and POW! HTC would have a sure fire winner.

You can get the Sensation XL from £34 per month with Three or £40 on their all you can eat data package.