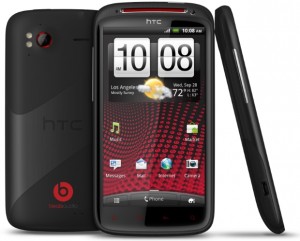 HTC has listened to its customers who asked “what about Dre?” and have given their latest smartphone, the HTC Sensation XE, the Hip-Hop impresario’s Beats treatment.

We all knew that this was on the cards after HTC brought in Dr Dre and now we can see the official result after the leaks.

The Sensation XE is a refreshed version of the much applauded HTC Sensation with Dre’s clever Beats audio tech, as well as a faster processor and improved battery life – oh, and not forgetting the very street red and black threads.

I’m guessing that the Sensation XE will still be running Android version 2.3 Gingerbread with the Sense user interface looking sick on the 4.3-inch screen.

So, the Sensation XE comes with a set of Beats by Dr. Dre earphones which, when shoved into the XE, tells the smartphone to switch to a different audio profile – now, I’ve tried a couple of Dre’s cans before and this generally means that you get a phatter b-line.

Saying that though – the products with Beats Audio inside have been very good through my AKG headphones and delivered a decent audio spectrum.

Those bundled ear-pleasers come complete with an in-line remote that lets you control music playback, or answer calls via a built-in microphone.

That boost in the engine room is jump from the current HTC Sensation. The regular Sensation packs a dual-core 1.2GHz chip whereas the new Sensation XE nudges it up thanks to a dual-core processor clocked at 1.5GHz.

To be honest, the Sensation was fairly nippy so I am prepared to be impressed by this ‘leaned-on’ version.

Word is that the HTC Sensation XE is tooled up with a bigger cell which is good news.

It’s all well and good cramming in some clever audio witchcraft but if your battery is going to pass out mid-way through some dope jams then it jus aint no good bruv.

HTC says you’ll be able to get your hands on this urban handset from late September.