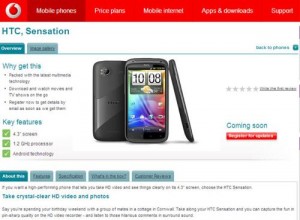 It looks like Vodafone got a little over excited about stocking the HTC Sensation.

The network provider leaked details and allowed prospective buyers to register for updates on its online retail site – all this a matter of hours before the big official reveal.

Vodafone has kindly confirmed a number of features on the Sensation, the mobile formally known as Pyramid.

Under the HTC Sensation’s hood is a mighty 1.2GHz dual-core processor which is partnered with a 4.3-inch QHD SLCD display and 4GB of internal memory which can be boosted by way of an 8GB memory card.

Could the Sensation’s potent processor be the reason for Samsung upgrading the Galaxy S II’s engine up from the single core unit to a 1.2GHz dual-core CPU?

The rest of the leaked specs for HTC’s latest Android offering includes an 8-megapixel rear-mounted camera which can capture HD video with stereo sound and a second 1.2-megapixel front-mounted snapper.

Will you be signing up?