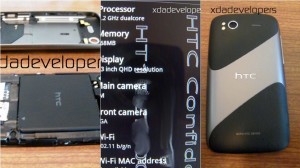 A week or so ago there were some ropey and ‘are they/aren’t they’ spy shots of HTC’s Pyramid. I didn’t bother to report as there was literally only the possible pictures to go on.

However, now there’s a decent dollop of goodness to go with even more shots of HTC‘s up and coming smartphone.

The HTC Pyramid is stacking up to be a beauty!

For you lens monkeys you’ll be feasting on the bounty of an 8MP rear cam whilst there’s a 1.3MP snapper up front.

The rumblings are that the Pyramid will drop with Android 2.3.2 with Sense 3.0 draped lovingly over it.

Now, my main gripe with the Desire HD was its battery life – and the Pyramid looks to be quite a lot of phone so I’d hazard a guess at regular pit stops to keep it ticking over will be in order.