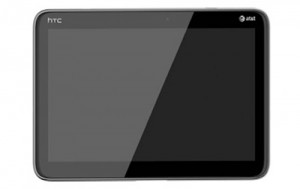 HTC seem to have a bewildering amount of devices heading to market lately and their most recent is the Puccini Android tablet – now there’s some details to go along with the rumours.

The tablet will be a 10.1-incher (compared with the Flyer’s 7-inches) and will be equipped with a 1.5GHz Qualcomm MSM8660 dual core processor, and powered by Android 3.0.1.

Following all the new handsets that HTC is set to send out to AT&T which feature LTE-connectivity on board, the Puccini will be the packing the same tech inside its tablet body.

The tablet will also support both, resistant and capacitive touch.

The HTC Puccini may be the Honeycomb tablet to beat with its Sense UI and support for that cool Scribe pen that the Flyer has been showing off recently.