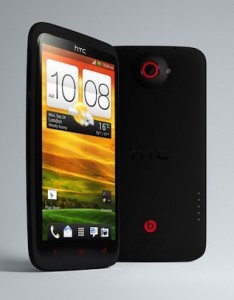 I’ve not made any secret about how much I like the HTC One X – now the Taiwanese tech giant has given the smartphone an overhaul and added something more positive than just a +.

HTC has just announced its One X+ and has loaded it with more powerful processor and beefier battery.

The One X+ looks pretty much identical to the One X which must mean that all the good stuff is under the bonnet. Word has it that the One X+ is fractionally larger than the One X.

To start with, the One X’s quad-core processor has been given an upgrade, ditching the 1.5GHz chip in favour of the 1.7GHz NVIDIA Tegra 3 AP37 – this should give the 4.7-inch smartphone a noticeable boost.

Meanwhile the 1,800mAh battery that lurked inside the One X has been chucked out and a 2,100mAh replacement fitted. This should sort out the phone’s plug dependency.

Android 4.1 Jelly Bean is on board wearing the loving coat of HTC Sense 4+ so all is bang up-to-date there. There’s more room for your media on the One X+ thanks to its increase to 64GB which is fortunate as there’s still no sign of a microSD slot.

A new feature in the HTC One X+ is HTC Get Started, a new web service that guides the user painlessly through the set-up and personalisation process from a desktop web browser.  Designed to enhance the experience of setting up a phone for the first time, this feature ensures that users will get the most out of their new phone from the beginning.  With the touch of a button the users’ phone will reflect the settings and apps that were chosen on the Web. Check out start.htc.com for more details about Get Started.

The One X+ retains the 720p display and 8-megapixel camera with a 1.6MP snapper round the front. The bangin’ Beats audio tech also makes a return. All of which is no bad thing.

“We are taking the HTC One X to a new level with the introduction of the new HTC One X+,” said Peter Chou, CEO of HTC Corporation. “Our customers will have super-fast browsing, an even better camera and more immersive entertainment with Beats Audio.”

I’ve been slipped the info that the HTC One X+ UK release date is set for early October and, thanks to a leak from O2, will cost £479.99 (without a charger) – a darn sight cheaper than the comparably-spec’ed iPhone 5 which costs £700.