HTC One X Hands on Review – is the Quad-core Ice Cream Sandwich Flagship any good? 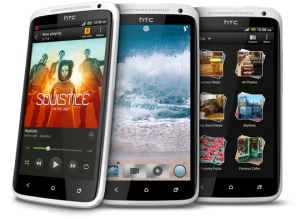 HTC’s new One range includes the HTC One S and HTC One V is a bold statement of intent from a company that is in the middle of huge changes. First it announces that bundled Beats earphones will no longer be featured and then the Chief Financial Officer that sealed that particular deal is removed from his seat.

All of that distracts from the fact that the One X features a slick design, a fast processor, a decent camera and still packs Beats Audio from Dr Dre.

The HTC One X has the flagship swagger with its swanky 4.7-inch screen – don’t be frightened by the size as it’s incredibly thin, will slip into your pocket and is comfy to use.

The last HTC mobile I groped for any length of time was the Sensation XL. The One X is so much better to hold and to look at. Sorry. It just is.

Once I had unpacked it I spent a good while just holding it. Yeah, it’s large but it also manages to feel right in your hand. The last phone that had me enthusing about its ergonomics was the iPhone 3G. It’s smooth in all the right places but also has a premium feel to it.

This may come from the unibody construction whose lines are only sullied by the power and volume buttons, the holes for the headphone jack and micro USB port and a outline of the Micro SIM slot. 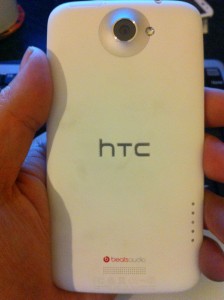 You would expect a phone with such a huge screen to feel and look ungainly but as it’s a mere 9mm thick it certainly doesn’t feel unweildly. Another bit of magic conjured by the Taiwanese tricksters is managing to make the One X feel top-end without the need for aluminium or glass.

The One X is made from polycarbonate – the same stuff used for ice hockey helmets I am reliably informed – which also makes it very light (130g) and stong.

Look closely and you’ll see the white back is matte but the edge and front are gloss. You may also notice that if you hold it sideways you can see how the top and bottom edges gently curve up. Nice touches one and all 🙂

I feel that I should note that on this white version the matte finish loved to pick up marks from inside my pocket or even the odd mucky fingerprint as seen on the phone’s back in the photo.

There’s no way you can avoid it – It is the 4.7-inch screen that, quite literally, dominates the One X.

The 720p HD display uses the Super IPS LCD 2 technology and will please your peepers no end. Video and games both looked great and, because of the screen size, had me quite immersed on my daily commute.

The display packs in 312 pixels per inch which tallys in at almost the same as the iPhone 4S, yup we’re tip-toeing around the Retina zone, but one covering an impressive area.

The colour reproduction is acurate and the text is sharp. Photographs had my workmates looking at their iPhone and looking back at the One X. When I powered up a video it had them speechless. I would have loved to test an Xperia S alongisde the One X for movie playback.

By the way, if you want to sling pics or flicks onto your telly, then the microUSB slot also doubles a Mobile High-Definition Link 😉

Where the front of the One X is the realm of the screen around back you can’t fail to notice the camera lens.

The 8MP camera protrudes quite a lot from the handset but doesn’t really affect how flat it sits on a table thanks to that gentle curvature I mentioned earlier.

The 8 megapixel/1080p camera is paired with a backside illuminated sensor and LED flash and is good. Real good.

HTC calls its camera cleverness ‘ImageSense’ but I just call it damned fine. The One X, for me, has the best camera of any Android  handset I’ve tried. Dare I say that it could also show the iPhone 4S a thing or two? Hmmm. Yup; I dare.

One of those things is that HTC has integrated photo and video modes into a single viewfinder. You don’t have to flick over to select one or the other and count to 5 while it switches over. Open the camera app and you have both options in front of you – to take a photo: press the shutter button. If you wnat to start recording a video, just press the video button. I am glad to say that once you’ve pressed your desired button things happen pretty much instantaneously almost without any shutter lag and with a fast and accurate autofocus.

I loved the fact that you can shoot stills while recording video or even extract stills from video in “post-production” by picking the frames you want from recorded footage.

If you want to add some Instagram-esque touches to your snaps then sepia, vignette, distortion and other effects are available.

A friend of mine has rated video capture as maxing out at 27fps but there is a mod to tweak this.

HTC One X – Need for speed 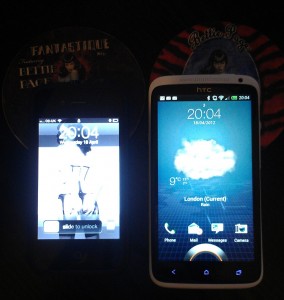 The One X is one of the first phones to employ a quadcore processor and certainly the first I’ve played with and it is smoother and swifter than I was expecting.

Flicking between screens, video playback and gameplay have all been seamless as well as glitchless.

As well as that potent processing power the One X is also one of the first smartphones to pack Android 4.0 Ice Cream Sandwich and this is coated in a loving cloak of HTC Sense 4.0.

The lock screen offers the familiar ring-pull to open the device but you can also drag one of four, user-selected icons. The handy defaulted ones are phone, mail, messages and camera – dragging these into the ring launches that app or function.

I also liked how fast it was for the One X to grab all of my contacts from my iPhone 4 during set-up. It was a painlessly quick process and, as I scrolled through the list I noticed the nice touch when you reach the end of a list the entries pull apart as if they’re on individual slips of paper. I know – it’s the small things.

I have been using the One X as my main device for a week now and it has been faultless. The phone’s performance is impressive.  Over this time it has not confused itself, stuttered or lagged during any task I’ve thrown at it – something I can’t say for some other ‘droids I’ve tested.

This is the bit I was most nervous about as everything else had been faultless.

You have to keep in mind that the sealed-in power-source was spending its days pushing along four Cortex-A9 cores at speeds of up to 1.5GHz whilst lighting up an impressive 4.7-inch HD display – if that doesn’t spell ‘go-juice leech’ to you I don’t know what would.

Surprisingly the One X definitely had the legs on my iPhone 4. At some points the HTC would go almost 1.5 days without needing to see a plug. Days of full-on messing would still get to bedtime before needing to tuck the One X in with a warm, milky drink.

If you hammer the gaming then the One X can get quite warm. The main hotspot seemed to be just below the camera lens but, unless I was imaging it, the same point on the screen was also getting warm. Obviously this might just be a quirk of this particular machine.

Apparently there’s a mod to squeeze even more out of the One X’s cell.

As I’ve already mentioned, this is a fast phone equipped with almost Retina Display pixel packing so images and text are all lovely. 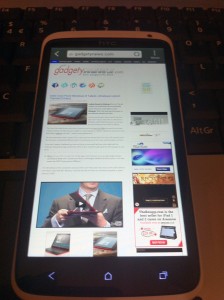 Browsing is another area where that large screen is a bonus. Pages are quick to load and text is sharp. You even get an Apple-style ‘Read’ button which strips out images to leave just text.

The menu button offers neat extras like a tab option that makes incognito browsing easy and one-press access to Flash player or desktop versions of sites so you can browse how you want and you get the option if you want to save battery and/or your data allowance – unless you have Three’s all you can eat option.

The tag-line for the One series is “Amazing Camera, Authentic Sound” – if you’re promising authentic sound then why package them with Beats Audio tech? Beats may as well be called Bass. It does give pop, hip-hop, dance and other, more processed tunes a bit more punch but, just as with the Beats earwear, it’s what the Dr (Dre) ordered – not what the artists, producers or engineers that worked hard on the tracks wanted you to hear.

Ignorning that little rant, however, the One X supports AAC, FLAC, MP3 and WAV and the refreshed Music tab looks good and allows you to link directly to apps such as Spotify, Tunein Radio and the heavily integrated Soundhoud app – a Shazam-like music recognition and information service.

Calls were clear and the dual-mic noise cancellation has been tested through the recent wind, hail and rain with no complaints coming from my conversation buddies.

You also get DLNA streaming and aptX Bluetooth for superior streaming music quality which I tested thanks to some AKG 830BT cans (review to come soon) and it is good.

With 32GB of built-in storage and 25GB free Dropbox storage for two years there’s plenty of room for your Prince, Rush and The Fall discographies.

A huge, bright, clear display, a super-slim chassis being powered by quad-core processing and Android 4.0 Ice Cream Sandwich – HTC One X certainly is a beautiful piece of kit.

It’s stylish, light, and had me using it as my main blower over the iPhone. This is the phone that HTC needed to produce and I for one am happy that they have.

You can get the HTC One X in white for free on a 24 month contract paying £32 p/m or pay £90 up front and £30 each month and get all the data you could possibly want.