HTC One Mini is here 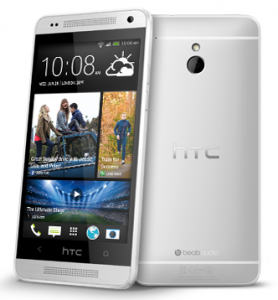 The HTC One Mini has landed!

The smaller sibling to HTC’s gorgeous One has officially broken cover, but can it live up to it’s bigger stablemate?

Well, certainly at first glance you’d be hard pressed to tell the difference between the One and One Mini from a distance.

Truth be told, it’s not loads smaller even with its 4.3-inch display. The only real hint that the One Mini has been tasked with winning over the slightly less-expensive arena is that its outside band is plastic.

The smaller 720p, 341 ppi screen will probably win over those with smaller hands and shorter fingers as it will lend itself better to single-handed operation.

The One Mini’s camera is the same as the flagship being the same 4MP Ultrapixel camera found in the HTC One.

Under the hood is a 1.4GHz dual-core Snapdragon 400 processor so it would be interesting to see if flicking through Sense 5.0 is just as seamless as it is on the One. Storage is a non-expandable 16GB.

The HTC One Mini retains the One’s 4G connectivity but loses NFC and integrated IR blaster.

HTC is pricing the One Mini “two price tiers below” the One on operator tariffs, I hear that EE will be stocking these at the August UK launch.

I will be trying to get a One Mini to review soon.