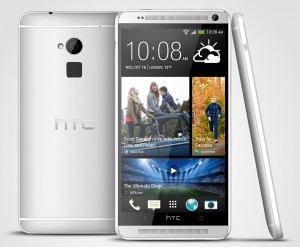 Not to be left behind in the phablet arena, HTC is the latest to follow the ‘bigger is better’ mantra. Meet the cornfed giant known as HTC One max.

The HTC One max is basically a larger version of the award winning HTC One and at the opposite end of the scale to the One Mini.

You’ll get all that lovely stuff such as the performance and sleek design of the HTC One, albeit in a larger package.

This means that HTC BlinkFeed, HTC Zoe and HTC BoomSound will all be present and that will all rest on the spanking new HTC Sense 5.5 which aims to deliver the best overall smartphone experience – on a larger screen, of course.

Your eyes will love the HTC One max’s 5.9-inch Full HD 1080p display. It should be pretty good for enjoying photos, videos and movies whenever you are on the move. Powered by a quad-core Qualcomm Snapdragon 600 processor buddied with a quad-core 1.7GHz CPU, it should be able to handle all high graphics intensive apps without so much as batting an eyelid.

The HTC One max will also arrive with 16GB or 32GB of storage space on-board, that can be augmented via a microSD memory card slot – something that the regular HTC One doesn’t have.

Oh yeah, did you know that HTC One max owners will also be able to pick up 50GB of additional free Google Drive online storage?

This is in addition to updates to HTC’s Video Highlights functionality and a new Dual Capture camera feature, which allows people to capture memorable moments and their own reaction to these with a photo or video simultaneously.

Something else that the HTC One max has that the ‘normal’ sized One doesn’t is a dedicated fingerprint sensor. Unlike the more conventional (ok, logical) home button location of the fingerprint sensor in the iPhone 5s, the One max’s sensor is located on the back of the device, near the camera.

The sensor is activated via a swipe and can be programmed to recognise three different fingers. Each finger can be tied to a different function, allowing quick access to frequently used apps. One finger, for example, can unlock the phone, while another might open up the camera.

While that sounds useful in theory, reviews of the HTC One max have likened its fingerprint sensor to little more than a gimmick – Hmmm… pretty much like the iPhone 5s then.

One failing seems to be that the One max fingerprint sensor only works after you’ve awoken the phone from sleep.

There has also been complaints that you end up swiping the camera lens as well as the sensor. Until I actually get hands and fingers on with one, I shall reserve my judgement.

Pricing details have yet to be announced, but you can be sure that the HTC One max will roll out worldwide from the end of October onward.