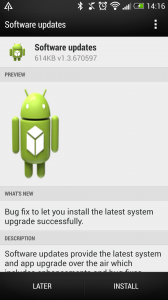 I gave you a heads-up that the HTC One Sense 5.5 update rollout was about to begin which would bring a range of tweaks and updates to those with HTC’s flagship smartphone. Now it’s hitting home, so UK One owners, check for the update.

News of the international update for HTC One devices, which packages both Android 4.3 and Sense 5.5 together, was already mentioned by @LlabTooFeR, a notable ROM developer, on Twitter.

HTC Sense 5.5 made its debut on the HTC One max, bringing a number of refinements to Sense, including some deep revisions to BlinkFeed, a reworking of video highlights and improvement to the Gallery. 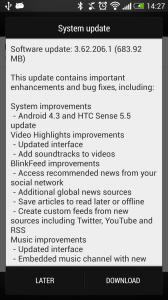 The update situation for the HTC One is currently slightly confusing. Some devices have been updated to Android 4.3 already, without updating to Sense 5.5.

I’ve now got the Android 4.3 and Sense 5.5 updates but I had to grab a bug fix before the main event (first picture).

Like all software updates, Android 4.3 can be downloaded to the HTC One over-the-air. You can check for the update from your handset manually by going to Settings -> More -> About device -> Software update.

So, what do you get? 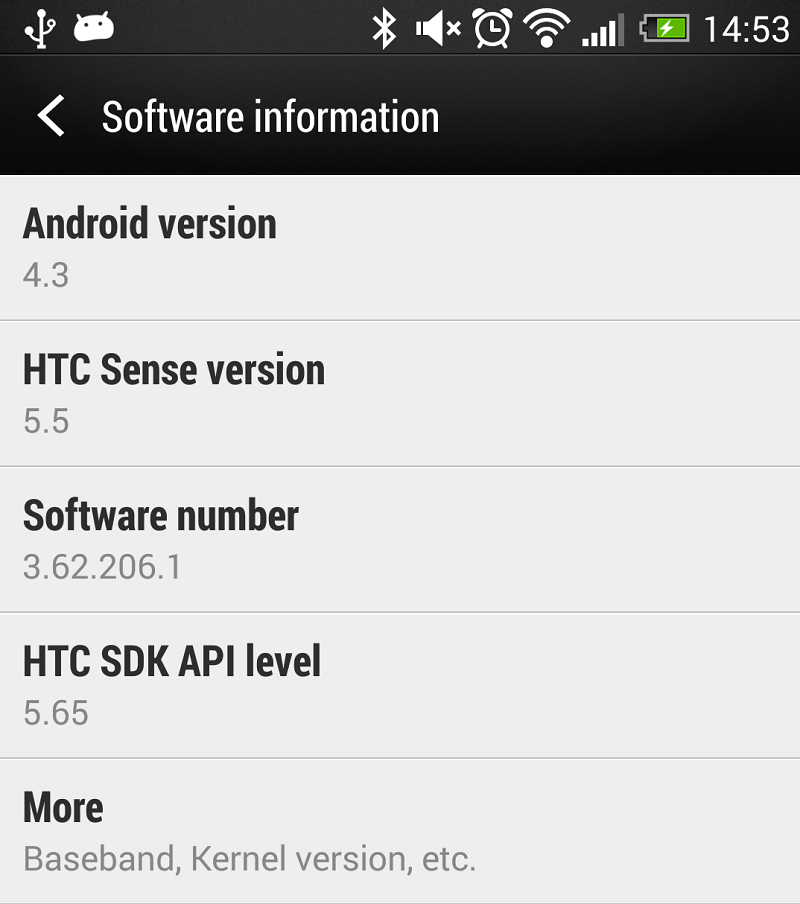 BlinkFeed has received most of the attention in HTC Sense 5.5. This is more of an overhaul than a simple refresh.

You can even – Turn off BlinkFeed

You could always have additional home pages alongside BlinkFeed in Sense 5 and the same applies in Sense 5.5. But now, from the same customisation screen, you can simply turn BlinkFeed off and return to a typical home page with widgets, shortcuts and so on. If you preferred the look of Sense 4, or just went for Nova Launcher or the like, then you’ll have been waiting for this.

To turn off BlinkFeed, just pinch it to enter the home page customisation menu, and tap the top left-hand option. BlinkFeed will then blink out. It’s not the first iteration of Sense to allow this: Sense 5 on the HTC One X also gives you the option to display a “classic” home page rather than BlinkFeed.

For those who like BlinkFeed, you’ll find that a fair amount has changed, from how you control the content, to what that content is, to filtering what you’re shown.

It all starts with a swipe to the right, revealing a menu, through which you’ll access all the various settings and options. This makes BlinkFeed feel more like other Android apps, like Google+ or Facebook, as the menu interface is now similar to those.

When you sign-in to your new device, you’ll get the option of customising BlinkFeed based on the things found on your Facebook page. It’s a quick and easy way of getting you started. If you’ve liked a bunch of bands, then expect more music news hitting your BlinkFeed.

The new menu has a top search bar, along with add content and menu options, but then displays the content selection you’ve picked ranging down in a list.

It more obviously highlights the various selections you have pouring into BlinkFeed for quick filtering, but also gets around that awkward situation of triggering pull to refresh when you actually wanted to post something or change something instead.

So now you can head into that sidebar and opt to just show a particular topic, or something like Twitter, just by tapping on it.

Perhaps the more useful option is to be able to then create a custom feed from a search.

The galleries, your images and what you can do with them also get a makeover in the Sense 5.5. The gallery now opens and adopts a carousel for navigation, so from your albums you can swipe sideways to events or “my HTC shares”.

The big change comes when you tap on your camera shots. This again has a carousel style, swiping across to video highlights, or through to locations. It makes the camera album feel much more engaging than the static images of before.

While video highlights get much of the glory, it’s the Zoe capture mode that’s behind some really great features. Zoes on their own aren’t so useful, but the short clips they capture look great in highlight videos and can be edited in lots of ways.

A new addition is GIF creation, so if you’ve captured your friend falling off of a bar stool then you can turn it into internet gold right from your phone. You simply have to move the sliders and you have a GIF to save and share. You can select the speed, direction of play and apply effects too.

The music player has also had a navigation redesign that, like the Gallery, uses a carousel style, so you can swipe across, rather than using a drop-down menu. It makes navigation easier, as there’s less tapping around.

Select a song to play and you get a similar album art view, but there’s more left and right swiping, so you can swipe across to your music queue (and remove that track that you don’t want), or swipe across to the visualiser, which will give you the lyrics if they’re in the Gracenote database.

Where you’d find that visualiser button in Sense 5, it is now replaced with the option to select the playback device. That’s where you’ll be able to send it over to a connected Bluetooth device, for example.

Sharing media is a little more considered in Sense 5.5: the 3-finger gesture that previously would look for HTC’s Media Link HD will now also let you connect to Bluetooth and DLNA devices too.

Sense 5.5 elevates HTC Share, the company’s own route to sharing. It’s integrated into the galleries, looks to take care of your video highlights, and you can flip through to “my HTC Shares” to see what you’ve shared and how much of the 250MB storage you’re using. It’s not designed as a permanent repository because the size is limited and it will expire.

HTC obviously wants you to use HTC Share, because hitting the “broadcast” button gives you lots of sharing options – messages, Gmail, Facebook, etc – before uploading the video to HTC Share and then returning a link with text, ready for your chosen sharing method. That’s what it’s doing: it’s giving you a link to share on Facebook, rather than sharing the video itself.

As before, however, you can save a video, at which point it creates an MP4 which you can share at will.

This still offers 12 icons, as before, but now they can be customised. There’s an edit option that will let you add or remove elements, as well as change the order, so it will show you exactly what you want.

This introduces a whole range of new options too. You get Do Not Disturb, Fingerprint Scan (for the HTC One max), but also data roaming toggle, media output control, auto sync toggle, ringtone changer, screen timeout settings, and sync all.

In this mixture there’s plenty to choose, although you’re limited to 12 icons in the menu, so pick your selection carefully.

One of those new settings is Do Not Disturb. The name suggests what it does, namely it blocks all incoming calls and turns off all your notifications, perfect for those busy days or nights when you really need a peaceful sleep. Similar to what you’ve probably seen in iOS.

There are a couple of options to control it, with a timer option that will turn it off after a particular time period.

If there are some people you always want to be able to call – your partner, boss or best friend for example – then you can create an exceptions list and these people will still get through in Do Not Disturb mode.

The recent apps, or multitasking, view is now expanded so the app thumbnails fill the page more, with less of a black gutter between them. The name of the app has now shifted into a shaded bar across the bottom of the thumbnail.

It makes little difference, apart from bringing a little more visual impact, as it all works the same as previously.

We can’t be certain whether this is a play towards the larger display of the HTC One max, but we can’t see any reason why the HTC One shouldn’t get it too.

A new app, Scribble, has been introduced in Sense 5.5. This is an app that’s designed for taking notes, making lists, making cards, sharing pictures and so on.

There are a number of templates, so you can quickly choose the style you want and head into the design, customising along the way. You can add text, put stickers on and do all sorts of things.

You can then share your creation, with options to create links with the note saving to Google Drive, or you can turn it into a straight image file to share. There’s the option to send your Scribble as an attachment, although the .lucy file type probably won’t be recognised at the other end.

It’s more of a mess around tool than anything serious. Put it this way, I’m not deleting Evernote any time soon 😉

Have you got yours yet? Did you have any issues?