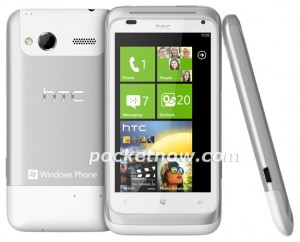 Yet another leaked Windows Phone 7 handset this time from those cell cobblers HTC. Have a sneaky peek at the HTC Omega.

You will notice that there’s a front-facing camera above the 3.8-inch SLCD display which may well confirm previous reports of Skype integration arriving with the Windows Phone Mango update on September 1st. If not, least you’ll be able to take self-portraits.

Other listed features include single core 1.5GHz Snapdragon processor, 512MB of RAM as well as an 8MP snapper.

HTC is rumoured to also be due to reveal a higher-end device, named Eternity, next week.

More as I get it folks 🙂