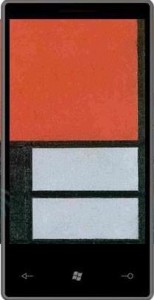 The HTC Mondrian apparently is only the codename for the device – which is a shame as the De Stijl artist Piet Mondrian is one of my favourite artists; but there you go. The name is a nod to the design of the Windows Phone 7 layout.

Its name has been referenced in a leaked Windows Phone 7 ROM, proving its existence.

Apart from that, the details are a bit sketchy.

Being a Windows Phone 7 phone does mean that it will have to sport a large capacitive touchscreen and a 5+ megapixel camera – most likely to be running on a 1.3GHz Snapdragon processor.

If Windows Phone 7 is still on schedule, the HTC Mondrian should hit shelves later this year.