Remember back at the start of the year when I reported on the HTC Mini, the companion device that connects to your smartphone and lets you take calls without exposing your flagship / oversized handset? Well, Engadget got to play with it, and Fetch.

The tech blog was invited to get a hands-on with the new HTC Mini+ and a Bluetooth tether designed to clip onto your key chain so you can keep tabs on your belongings, called Fetch.

If you recall, the Mini+ is a Bluetooth feature phone that you can use to save you using your smartphone while out and about.

As you’d imagine, with hardly any internals, the Mini+ hardly weighs anything – so at least that means carrying this extra uni means carrying an extra load. As exciting features go, the device also doubles as a presentation remote and even comes with a laser pointer.  You can even use the Mini+ as a remote trigger for the smartphone’s camera.

If you were disappointed that the One Mini lost out on the One‘s infra-red blaster, then you’ll be pleased to see that the Mini+ hands it back. I’ll give you a few seconds to read that last sentence over again as there’s a few Ones and Minis going on there. 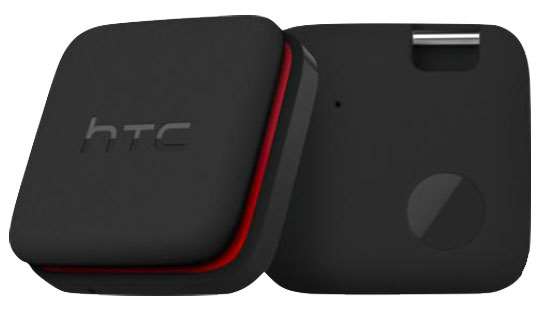 Fetch is an eraser-sized (and similarly light) black cube on a cord that clips to your keychain. Once paired to your smartphone over Bluetooth 4.0 (LE) it will detect when it’s more than 15 meters away from its Bluetooth buddy it will start to complain until they are both brought back together.

This means that you’ll always be alerted if you’ve left your keys (or smartphone, as it works both ways) behind or if some ne’er-do-well is trying to make a getaway with either of them. Granted, if you’re daft enough to leave *both* your keys and phone available to be lifted then the alarms wont ring – it’s also proof that you don’t deserve either of them.

The unit will also geotag its location should it ever run out of charge, so you’ll know its last known location and can pull double duty as a camera shutter.

It’s not clear if Fetch will work with other Android smartphones.