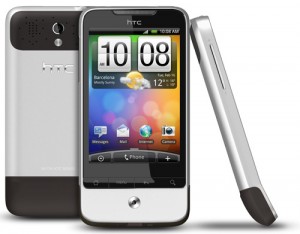 HTC have been busy and have unveiled a number of new mobiles at the MWC.

Thing is that, in my opinion, none of them look as lovely as the HTC Legend.

The body is carved from a single piece of aluminum – Mmmmm….. unibody….. I hope Apple are watching! 😉

Under that gorgeous hood purrs Android 2.1 wrapped up in HTC Sense.

The Legend sports a 5.0 megapixel snapper that’s paired up with autofocus and flash.

There’s a microSD slot to increase it’s capacity as well as the now expected Wi-Fi, Bluetooth, and GPS.

With Helicopter you get to be able to pinch the screen to view all the five Android homescreens which helps you jump from widget to widget with ease.

Social Networked butterflies will get plenty use out of the new FriendStream. This pulls together all status updates, photos and links from your various social networking sites (Twitter, Facebook and Flickr are the ones supported at the mo), but you can still use the individual widgets and apps if that’s how you roll.

It’s out in Europe late March/early April – go on; admit it. It’s nice 🙂