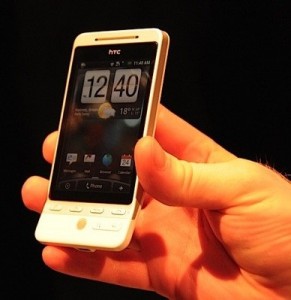 The HTC Hero is HTC‘s third Android handset and has just been made official at its first public engadgement here in London.

The Hero seems much slimmer than HTC’s previous Android blowers and sports a 3.2 inch TFT-LCD with 320Ã—480 pixel resolution that packs multi-touch and has an anti-fingerprint coating. It also throws in a five-megapixel camera – you hear that Apple??!!??

Under the hood purrs Qualcommâ€™s MSM7200A processor, which runs Android at 528MHz, 512MB of RAM, GPS, Wi-Fi, G-sensor and a compass. Itâ€™s also the first mobile phone to include internet Flashplayer.

HTC Sense gives the user a whole host of new options via a widget-based interface that puts at-a-glance info right up front on the home screen where it belongs.

Is the Hero Heroic enough for you?