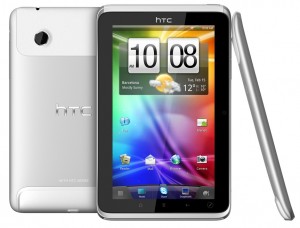 If you’ve been eagerly awaiting the release of the HTC Flyer Android tablet, you know, the one with a clever stylus that allows you to scribble on any page being displayed – then read on.

HTC’s European president, Florian Seiche, has just announced the important date at HTC’s London press conference – the same place where we were supposed to be surprised by the HTC Sensation announcement, but Vodafone put paid to that 😉

The 7-inch Android 2.2 tablet will be available across Europe on May 9th, so start saving those pennies.

Thing is, the price is still to be confirmed so just save as much as you can til then 🙂