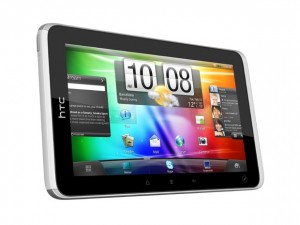 The HTC Flyer is now up for pre-order right here in the UK right now!

Clove states that they’ll get the first batch of Flyer’s in mid-April and they’ve tagged it with a £600 price sticker but that could go up or down. I think it’s a fair ballpark figure but once HTC confirms the price officially expect some price tag tweakage 😉

If you recall back when the Flyer was unveiled at Mobile World Congress people liked it overall but questioned HTC’s reasoning for slipping Google Android 2.4 Gingerbread OS on there rather than the tablet-centric 3.0 Honeycomb.

I would not be at all surprised to see the Flyer either appearing with Honeycomb at release or it getting a 3.0 update in the not too distant future. That would put it in the ring with the likes of the Motorola Xoom.

The HTC Flyer has a 7-inch screen and will be using their lovely Sense user interface over the Android operating system which has won them plenty of fans buying the HTC rannge of Android smartphones.

It’s also kitted out with a 5-megapixel rear camera and 1.3-megapixel up front camera, 32GB of storage and a 1.5GHz single-core processor.

The version being offered by Clove is the 3G and Wi-Fi model, although we’re assuming it’s SIM-free, since no operator is mentioned on the pre-order page.

As well as the Flyer’s Scribe technology which allows you to scribble on the screen by use of the Flyer’s stylus; the Flyer is the first mobile device to ship with the OnLive cloud-based gaming service, something flagged up in Clove’s product listing.

Now, as far as I am aware, OnLive is still working through its UK release plans so whether the HTC Flyer will land with the streaming game service or it will be merely OnLive ready is yet to be seen.

If 7-inches is not quite your ideal and you’d much prefer the Flyer to be rocking a 10-inch display I’d suggest holding your horses. Word on the street is that HTC are currently cobbling a 10-inch Honeycomb slate 😉