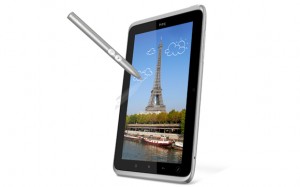 HTC have been flashing their new Flyer tablet around MWC as it joins the growing throng of Android tabs.

The 7-inch Gingerbread tablet will get a Honeycomb flavoured boost shortly. Under the hood of the HTC Flyer thereâ€™s Wi-Fi and 3G with HSPA+. Naturally there’s the lovely HTC Sense wrapper over the Android UI.

What does separate it from the masses is that it has a stylus – HANG ON THERE!

This is an ‘active’ stylus – itâ€™s not used to navigate, but to draw directly into Android.

The HTC Flyer is pretty clever as it can tell the difference between the tip of the stylus and the tip of your finger. This means your general pokes and prods will be read as just that, however, use the stylus and it will â€œflow ink into the tabletâ€.

Not only that – Itâ€™s pressure-sensitive too! Press harder on the stylus and more digi-ink squirts out. There are two buttons on the HTC Flyer tablet one erases the ink when pressed down, and another to highlight text using the stylus.

Most interesting of all though, HTC has created a new API (Application Programming Interface) with the intention of handing it over to developers so that they can make the stylus do even more.

This kinda opens up the whole multi-touch arena even further. Seeing as the tablet can tell the difference between a finger and a stylus there’s no reason why you couldn’t ‘paint’ something on the screen and then use your finger to smudge it as a regular artist would.

For you business types you’ll probably like HTC’s Notes app which records audio of meetings, and lets you scribble handwritten notes to go with them. Later, you can tap those notes to replay the audio that was recorded at the time you wrote them. Great for minute taking and remembering what you agreed to do…

The 3G HTC Flyer goes on sale in Q2 with a Wi-Fi only version appearing later in the same quarter.

All versions come including the stylus and a carry case to hold the HTC Flyer and stylus as standard. There’ll be a range of accessories, including a dock, a pouch with a stand and a Bluetooth keyboard to eat into your savings – if you have any.