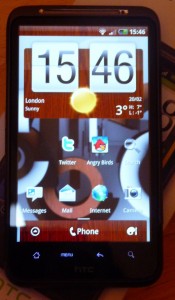 The larger screen retains the same WVGA resolution, 480×800 pixels, of its little bro but the larger screen doesn’t look blurry or low-res. Granted, it’s not up there with the iPhone 4 or highly regarded Samsung Galaxy S but it is good enough to impress those friends of yours that donâ€™t own either of them.

HTC has removed the trackpad and the soft keys from the HTC Desire and replaced them with four touch sensitive buttons – Home, Menu, Back and Search. Around the back you’ll find an 8-megapixel camera with dual LED flash.

On the side are the dedicated volume controls and on top is where you’ll find the power button. The 3.5mm jack sits in the base next to the Micro USB slot. There’s 1.5GB on-board storage and a MicroSD slot – you need to feed that gap in order to shoot video.

The machined aluminium case feels wonderfully solid and there’s the comforting feeling that, since the aluminium case wraps around the edge of the screen, the Desire HD should survive an accident or two.

The thing is, the metal case does add some weight as does the huge screen – this tally’s up to it tipping the scales at 164g.

The screen is nice and responsive and the Sense user interface is a joy to use as ever. The Sense’s clock and weather widget has almost reached iconic status, just check out all the imitations on the Android Market!

The social-network integration on the Desire HD is excellent. The address book pulls in profile photos and updates from your contact’s Facebook and Twitter accounts. When you get a call from someone in your address book, their photo and latest status update is flashed up – the gallery also grabs your photos from Facebook and Flickr. Nice touch.

When posting updates, texting or using the virtual board for anything for that matter you are incredibly grateful for the screen being so massive and typing in portrait is easy but sling the phone to landscape and you could almost touch-type!

Web browsing is possibly the area where the Desire HD’s huge screen really comes into its own. Sometimes trying to navigate an overly busy site on a mobile is an absolute nightmare. But not on a 4.3-inch screen it aint! Pinch to zoom, flick up and down to move around pages and text automatically aligns to fit.

The phone slurps up your Wi-Fi connection nicely thanks to the on-board 802.11n standard – when not on Wi-Fi you get 14.4Mbps HSDPA for swift downloading over 3G. You can use the Desire HD as a personal 3G Wi-Fi hotspot and hook your laptop up to it for more serious interweb shenanigans 🙂

The good ol Desire HD supports Flash Player 10, so you get all the web pages as they were meant to be. BBC iPlayer, Vimeo and even browser based Flash games were all displayed and acted as they would on a computer. The browsing experience is pretty much faultless on the Desire HD.

I’m not going to mention the underpowered external speaker but sling your choice of ear pleaser into the 3.5mm port and you will be spoiled as either Dolby Mobile or SRS lay a loving depth to your sound selection. Watching HD clips you almost get a home cinema in your hand. Music, especially that with prominent bass, brings Dolby Mobile in to play which really makes a difference. I also like the fact that you’re able to use the forward, back and pause controls even when the phone is locked.

The 720p HD movie mode isn’t as sharp as I was expecting if I am to be brutally honest about it. Also there’s no HDMI, although you do get DLNA for wireless transfer.

The HTC Desire HD has an 8-megapixel camera and size of the display makes it easy to compose images. Autofocus works well and you can also tap to focus. I would like to have seen a dedicated camera button even though the shutter is fairly fast that hard button would’ve felt a tad better.

Images are pretty good with plenty of detail, but that can lessen dramatically in high and low contrast areas. The dual LED flash is excellent though.

There are 13 filters you can apply to photos before (instead of after) you take them. Some are really useful like Greyscale and Sepia, others such as Depth of Field for instance may get occasional use I’d be prepared to bet that Solarize and Posterize are kinda like toastie makers and Soda Streams – used lots for 2 or 3 days and then put in a cupboard for a year or so.

The main drawback to all the Desire HD’s cleverness is battery drain. You have myriad widgets running which are grabbing info at regular intervals, the browser tempting you back to the interwebs, the screen begging you to play more games and videos and then, suddenly your phone gives a yelp and closes down.

Using the HTC Desire over the weekend it wasn’t even reaching the end of the day before it was gagging for some go-juice. Thankfully there is a power-saver mode which lets you know it’s time to cool it a little when reserves drop below 15%.

It’s easy to just call it a large phone but the Desire HD is a practically a portable computer and Mi-Fi all in one. On the subject of phones – making and taking calls were no problem (I was using Three’s network) and GPS, updating my social networks were all trouble free.

Verdict
Looking for a smart-phone fan that doubles up as a mini home cinema (when using headphones)? Want a phone with an excellent browser, can record and playback 720p movies, and has a durable metal skeleton? The HTC Desire HD will tick all of those boxes.

Some may see it as being too large but the current penchant for baggy jeans around your knees surely works in the Desire HD’s favour! That 4.3-inch screen is good for browsing and video playback, even for those that aren’t blessed with 20/20 vision but if HTC had only bumped up the resolution or slung in an AMOLED unit it would be unstoppable. It’s hard to look at it without comparing it to the iPhone 4 or Sammy’s Galaxy S which, in its current guise, is unable to beat on sharpness, brightness, clarity or resolution.

Where there is no room for complaints, however, is on the subject of the Desire HD’s UI. HTC’s Sense Android skin is a joy to use as always but battery life is another matter altogether. Have a few decent length phone calls, watch a few vids and hammer the Wi-Fi a little and you’ll be looking for a power outlet by early evening.

The HTC Desire HD is a great phone and is one of the best Android handsets I’ve used, it’s just a shame about that pesky screen resolution.