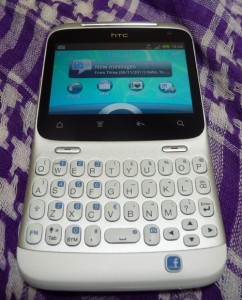 I’ve been living with the HTC ChaCha for a few weeks – so, is the touchscreen QWERTY keyboard touting, Android powered, Facebook-buttoned phone a huge socially aware hit, or just a maybe?

The ChaCha was released alongside the Salsa at the Mobile World Congress in February – both the Salsa and the ChaCha have dedicated Facebook buttons on their face but the ChaCha is rocking a BlackBerry-esque portrait keyboard.

The first thing you’ll notice is that upturned chin. The bend in the body is obviously there to make it feel nice in your hand and enable single handed thumb-typing (there’s room to unleash both thumbs if you so desired); and it does. It just looks kinda odd to me.

From the back though you could mistake the ChaCha for any one of the recent HTC blowers. You get the engraved metal strip and smudge resistant white body as per others in the Taiwanese phone cobblers arsenal. The fit and finish is also as good as you’d expect from HTC too!

All the buttons and ports are placed according to common sense thankfully. You get the standard 3.5mm jack at the top edge partnered with a nice and long power/lock button. There’s a micro USB slot and volume rocker on the left hand side.

Also at the top, just above the screen, sits a nice chromed speaker grille – that’s a nice touch. The HTC ChaCha does feel like a top-end phone and it certainly feels worthy to be up there with RIM’s latest offerings.

Now, if you’re going to take up all that real estate with a QWERTY-board you’d better have a good one!

HTC will be pleased to know that they have indeed got a goody. The buttons are large so even sausage-fingered typists should be ok and each key-press feels sturdy. The keyboard is pretty well spaced-out too. I’ve tested more cramped QWERTY conditions on a BlackBerry! It doesn’t take too long before you’re going for speed typing records – thanks in part to a sensible layout and the inclusion of four cursor keys for easy text editing.

When you’re on the ChaCha’s homescreen and start to type someone’s name the clever little thing will automagically bring up your relevant contact’s phone numbers. Oh, and hold down the full stop to get slung directly to the camera app. Apparently the space bar is supposed to react similarly to take you to the settings menu but even using ‘FN’ and ‘space’ nothing happened. Odd. (see what I did there? Space Oddity? Never mind!).

It was all going so well wasn’t it?

Unfortunately HTC failed to fit a screen as good as its keyboard. With all those lovely buttons taking up space they had no choice but to squeeze in a 2.6-inch landscape screen.

Granted, the 480 x 320 resolution does produce a good crisp image – it’s just a shame that it’s so darned small! Imagine coming to the ChaCha after using an iPhone or the shock of following the screen size experience of the Desire HD!

OK – so you shouldn’t need to be using the screen to type but the screen layout may cause some problems with a few apps. You may also find yourself zooming in and out of web pages more regularly than you should need to. At least those pages will appear as intended thanks to most being tailored to 16:8 monitors and the ChaCha supports Flash for those animated bits of sites.

I can’t help but look at the gap between the screen and the top row of the keyboard and think that they could’ve slipped in a larger screen. The room taken up by the Android softkeys and the call and reject buttons seems overly generous to me.

Now, the main unique selling point of this phone is that big blue button at the bottom.  Guess what this does?

Well, it all depends what you’re doing really. Give it a poke whilst looking at a photo it will ready that snap for instant sharing on Facebook, prod it when checking out a website and it’ll sling that link for all your friends to see. You can even tell your gang what tune you’re listening to if you push the button during a song.

Just so you know when you can share something the F button softly glows and flashes – you can also trigger a Facebook Places check-in with a simple long press.

Facebook Chat is something that HTC worked on as they were sure more people were looking for a better app for this. It works well on the ChaCha but I’m not a heavy user of this aspect of FB.

It might save you a matter of seconds by not having to access an app from a menu so I guess it depends on how often you access the #1 social site. A point I have already raised with the HTC guys is that you are unable to access Facebook Pages that you manage in order to post on them. Any social networker worth their salt will undoubtedly manage at least one Page and perhaps a Group, such as the ones for SUBSET, GadgetyNews and ByeByeKurt for instance.

So – close but no cigar!

With Android 2.3 and HTC’s latest and greatest Sense user interface onboard the ChaCha is pretty much bang up-to-date in software terms.

Unfortunately HTC have shoved in a tinsy tiny 800MHz processor under the hood which means you’ll notice that there’s some things missing. Looking for the Watch movie-streaming application? Not there. Mind you, would you really want to have a go at watching a HD flick on that titchy screen? Thankfully Android isn’t reliant on powerful processors and you wont notice any lag or stuttering between menus.

There’s something else that’s missing on the ChaCha – the very cool quick-access settings menu that’s squirreled away in the notifications bar on the Desire S and Sensation.

The ChaCha is equipped with a 5 megapixel  camera and, well, it’s ok for casual

You do get a front-facing camera though for your vid-chatting delectation and delight or for posting more self-portraits onto Facebook.

Call quality is clear enough as is audio playback – nothing spectacular to report but nothing really to gripe about.

Thanks in part to the tiny screen the ChaCha’s equally dainty 1250mAh cell lasts more than a day with everything switched on and plenty of browsing and syncing. It comes to something when a phone that will last a day on a single charge is worthy of reporting.

Is this a case of ‘Sorrow’ or ‘Be My Wife’? Well, to continue with the David Bowie theme, it’s more ‘Beauty and the Beast’.

The HTC ChaCha has all the makings of a great smartphone.  It’s built well, has a great QWERTY keyboard and performs all its tasks without muttering something unpleasant at you.

I’m still unconvinced by the Facebook button, especially until it hands you the facility to post via your Pages and Groups anyhow. Facebook chat may be a tick in the box for some and I am guessing that this is who the ChaCha’s market focus is – teens and twenties that need to be permanently hooked into the social networking matrix.

So – if you’re an oversharer or a BlackBerry user looking for a change – check out the ChaCha.

The ChaCha is available for free on a monthly contract with all you can eat data for £29 per month with Three –  SIM-free, the phone will set you back around £250.