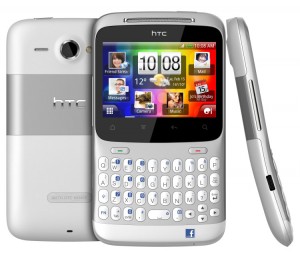 As predicted back in February, the HTC ChaCha will be landing in the UK tomorrow. It might not be the much rumoured Facebook phone but it’s as near as damn it!

Sure the INQ phones integrated the mighty social awareness of FB but the HTC ChaCha comes with a dirty great big F button right there on its face! If that doesn’t announce its intentions I don’t know what could.

Phones4u will be selling it online and in their stores from tomorrow – if you want to avoid the panic then you are able to pre-order yours now.

Itâ€™s available on Orange and Vodafone contracts for free if you signe up for a Â£20 per month two year contract or you can buy the ChaCha outright for Â£299.95 on Pay As You Go – oddly though this option is not yet listed on the online store at the time of typing this out.

I would really like to try this little AndroidÂ  beasty out in real life but I am sure, if it’s anything like the other HTC handsets I’ve recently groped, its build quality and touchscreen will be decent enough. I really want to give that QWERTY board a bashing though 🙂

Check out the vid clip below and let me know if you’re so hooked on updating your status and seeing what everyone else is up to enough to get a phone with an in-built hotline to Facebook.